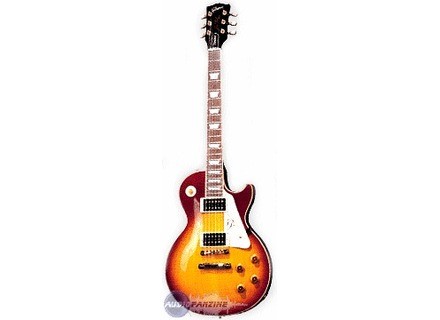 Gibson Les Paul Signature Jimmy Page
4
Aside from Les Paul himself, I'd venture to say that Jimmy Page was one of the most famous people to ever use a Gibson, so it was only natural he'd have his own guitar. The guitar features a mahogany body with a maple top, a mahogany set neck with a rosewood fretboard, standard trapezoid inlays, 22 frets, a tune-o-matic bridge, pickguard, two humbuckers, two volumes, two tones, push/pull setup and a three way switch.

The guitar was put together decently. The frets were leveled and properly crowned. The binding was done correctly, and there were some nice nubs going on. It was smooth when moving up and down the neck. However, the nut needed to be fixed up a bit. Whenever you tuned up, you could hear a big of a "ping" noise. That's because the nut was binding up in the slot. This can cause tuning instability and other issues once you start playing and bending. Some filing and graphite fixed it up, but just keep that in mind if you try one of these out.

This is one of the most versatile Les Pauls out there. First of all, the stock pickups aren't too bad. They have that classic Les Paul sound going on. The bridge is bitey but still very thick sounding. It works awesome for those huge rhythm tones when paired with a Marshall. The neck pickup has a bit of a bite to it, but it's still fairly warm. Turn the tone pot, and you got enough warmth for those smooth lead lines and fat clean tones. The guitar also has some coil splitting/parallel thing going on that adds tons of versatility to this for extra tones. Try pulling the knobs and see how you like it.

This is easily one of the most versatile Les Pauls to ever hit the market. If you can find one of these at a decent price (fat chance), I recommend trying to get it. They're not worth the money, but I can see why they go for as high as they do.