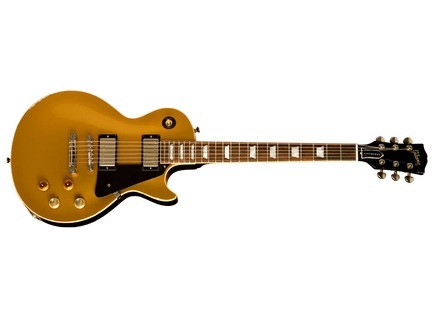 Gibson Custom Shop Joe Bonamassa Les Paul - Antique Gold
4
This is very similar to the normal Les Pauls out there, but the knobs are different to help distinguish between neck/bridge, and there are a few other smaller features such as the wrap around way of stringing vs the normal method. The guitar features a mahogany body with a maple top, mahogany neck with a rosewood fretboard, 22 frets, trapezoid inlays, pickguard, binding, hard tail bridge, two humbuckers, two volumes, two tones and a three way switch.

Joe is a sick player, so it's only natural that he'd have a pretty sick signature model guitar. The guitar was put together fairly nicely. There were no issues with the nut. The best way to tell is to simply play it. If you keep noticing you're going out of tune and it "pings" when you tune, that means the nut is cut improperly. The fretwork was also pretty good on this. I was able to achieve relatively low action without any real issues. The binding work looked nice, and the gold hardware didn't have any tarnish on it.

Joe's a killer guitar player, and this is a killer guitar. It sounds pretty solid, and to be honest, it's not that much different from any other Les Paul out there. There are a few other minor differences, but you can really just buy a normal Les Paul and get his tone. It's much more so in the playing style and amp choice than the actual guitar he's using.
Did you find this review helpful?yesno
»