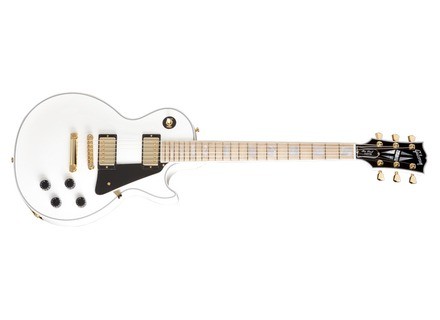 Gibson Les Paul Custom Maple
4
These actually came about as almost a fluke. Chinese copies of Les Pauls started having maple fretboards, and then Gibson decided to copy the copies. It was pretty bizarre, but we were able to get something a bit different from the norm thanks to that. The guitar features a mahogany body with a maple top, maple neck with a maple fretboard, 22 frets, trapezoid inlays, pickguard, binding, hard tail bridge, two humbuckers, two volumes, two tones and a three way switch.

This guitar had been refretted, and the new fretjob was great. They didn't keep the binding ends, and if you ask me, that's the proper way to refret a Gibson. The binding ends really just get in the way, and I find it doesn't even look as good. It's also way more effort than it's worth to try to keep those. The finish on this was scuffed up a bit, but it was no big deal as this thing was meant to be played. The nut was replaced with a brass nut, and I have a feeling the guy before who owned this was either a Sykes or Malmsteen fan. The quilted maple top on this was really cool, and it popped quite nicely with the finish that was on it. The maple fretboard was pretty dark due to the wear and tear.

These are probably some of the coolest looking Gibson Les Pauls out there, but they're hard to find, and the consistency on them is very iffy. I've seen a few that are total boat anchors, and a lot of that has to due with the era in which they were built. The Norlin era, while having some of my favorite guitars, also has some of the worst overall. You really have to play these before buying.
Did you find this review helpful?yesno
»

Gibson Les Paul Custom Maple
5
This is probably one of the rarest Les Pauls out there, and it's pretty controversial. The guitar has a mahogany body with a maple top, a set maple neck with male fretboard, 22 frets, binding, two humbuckers, a hard tail TOM bridge, two volume knobs, two tone knobs, two humbuckers and a three way switch. That maple neck and fretboard would become synonymous with the "bad" years of the Les Paul, but these can really sound amazing.

The Custom really excels in sound. Normally, Gibson Les Pauls are very thick sounding. This works great for most styles of music, but sometimes it lacks a tad bit of clarity for genres such as metal, especially once you start tuning lower. The maple neck and fretboard on this guitar helps add some sizzle and bite that allows the guitar to cut through the mix without sounding thin. I'm not a fan of the pickups, so I always replace both those and the pots. This really opens up the guitar and makes it not only more aggressive but more versatile as well.

It can be very hard to find one of these in good condition at a reasonable price. If you ever do find one, snatch it up. They sound amazing, in my opinion. Just be sure it sounds resonant as they didn't have the best quality during this period of time.
Did you find this review helpful?yesno
»

Bigb92's review (This content has been automatically translated from French)

It is perfect for my style but very versatile guitar c we go from blues to progressive metal in a good condition one click to have a good amp and good distortion behind (vox bulldog in my case) but a guitar that will c all its fullness in the big sound but not the neo metal hardcore or I do not know koi same for fans of Mark Knopfler and Stevie Ray Vaughan c not a LP custom for you
that being said look at the number of guys who play on custom there's no harm in such different Zaak Wylde, Adam Jones of Tool, Elvis Costello etc. c c obviously eclectic good not the same microphones etc. ampl mm but the base is the same so the legend of

It's been some time I have about three months but I also have a black beauty and they both have a color of its very different, more felt in this case for the heavier maple and black beauty but for the cele is for many the key I think the pickups are different but have a sound similar and almost the same impedance
the quality / price? bah c a custom is a legend I did not even asked the price finally unearthed the info g maple was 2000 euros
is what I do it again this election and again yes yes yes c sublime guitar remember a custom will always value
Did you find this review helpful?yesno
»