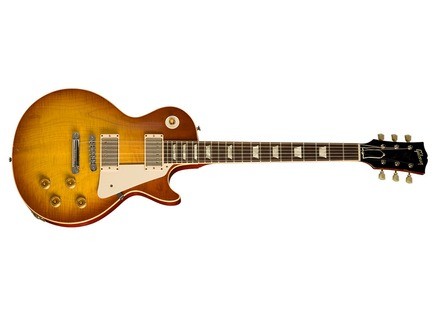 Gibson Don Felder "Hotel California" 1959 Les Paul
5
The Don Felder Les Paul is really what the quintessential Les Paul is, in my opinion. It has all the great features of a Les Paul without the fluff that some of the current ones have. The guitar features a mahogany body with a maple top, mahogany neck with a rosewood fretboard, 22 frets, trapezoid inlays, pickguard, binding, hard tail bridge, two humbuckers, two volumes, two tones and a three way switch.

The guitar sounded pretty good. It has your standard Gibson stock pickups installed in it like so many other Gibsons out there. I'm not a huge fan of these, but they can work. The bridge is generally pretty thick sounding and gives that nice, overdrive PAF sound. Through a cranked Marshall, you can get tons of killer tones out of it. However, I always found the neck pickups to be a bit bright for my liking, and I find myself reaching for the tone knob more often than not on these things. It really depends on what kind of neck pickup tones you're going for though. Solid medium output pickups.

Despite my qualms about the stock pickups, this guitar sounded absolutely phenomenal. It was nearly dead perfect, and it was the perfect representation as to what a Les Paul should be. The fretwork, the finish, the neck thickness, everything about this guitar was what I love about Les Pauls. If you get a chance to get one of these at a good price, jump on it.
Did you find this review helpful?yesno
»

Published on 09/02/10
In order to bring that sound, feel and look to a group of players and collectors today, Gibson Custom has introduced the Don Felder "Hotel California" 1959 Les Paul, an instrument created in the imag…