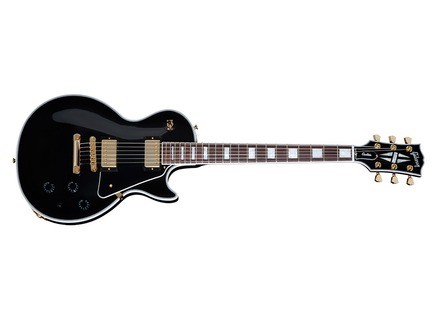 Gibson Les Paul Custom Lite 2013
2
Les Paul by Gibson made in U.S.
Mahogany body with a maple table, the width of the body is not a standard, there is the slim as the SG
22 round box in mahogany with rosewood Rosewood, 50 profile
One microphone and one microphone 490R 498T as the Les Paul Studio
2 volume, 1 tone, 3 position selector switch and single / humbucker button
Vintage mechanical Tulip
easel Gibson tune-O-matic and tailpiece Gibson Stopbar
Gold fittings
3 ply binding on the body and on the headstock, single binding on the edge of the handle, diamond logo, we have the illusion of having the custom shop Black Beauty

The single / double switch is more of a gimmick than anything else PIF, especially when you see the little bit they have to see in time, I'm not sure it takes a long time

missing something ... In short it does not sound a Les Paul that looks more like a standard SG shinier hair disguised as a Les Paul Black Beauty is a little disappointment I better understand why we find much of Pigalle and there is no big rush on this world that is more it is a limited to 275 copies (crisis or not?) series, the fact that the body is slim that necessarily impact the fart sound is dry, it lacks depth, presence ... in drive is not the slap as a Les Paul or we feel the essence that gives this mahogany bodied side, round and fat with this powerful crunch that just with a slight spring drive, with Custon Lite must push for get a sound and that's where the shoe pinches because by pushing one sees immediately that he lacks the stuff back to the range at the top with her big sister ...
The simple switch / dual I'm not a fan is already in possession of a Strat, a Tele and an SG with P90, split it sounds crappy, it lacks authenticity and especially we lose volume, c Eastern gadget

I expect this guitar for a while
compared to a studio I prefer Studio (former model) compared to SG SG I prefer, compared to a Les Paul Trad there are no pictures it is below
after is the look ... Black Beauty the side that kills his mama, by the sound against it will not forget the viagra grandpa
Finally, I made it back to the store ... without regret
the right side for now with a Gibson Les Paul body divided into two, they sell almost the price of a real Les Paul, well done guys ...

14 of 18 people found this review helpful

Published on 03/13/13
Gibson USA listened to their users and offers a lighter version of their Les Paul Custom in a unique Ebony finish.