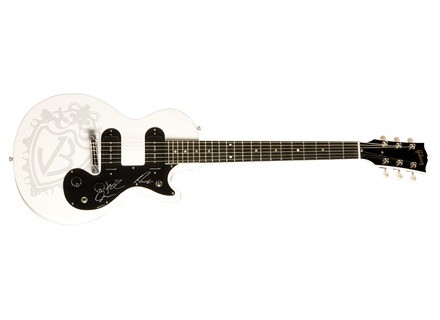 Gibson Jonas Brothers Melody Maker
4
The Jonas Brothers have been fairly well known for playing GIbson guitars, and the Les Paul Junior has been one of their go-to instruments for a very long time. It's not too different from a regular Junior, but a lot more attention has been put into these. The guitar has a mahogany body with a mahogany neck and ebony fretboard, 22 frets, dot inlays, hard tail bridge, pickguard, two P90 pickups, one volume, one tone and a three way switch.

This guitar actually comes PLEK'd from Gibson, and you can definitely tell a difference. The frets are perfectly level, and you can get some retardedly low action on this thing. It's almost like playing on water when you slam it. The nut was cut properly, so no issues with tuning stability either. It has a graphic on it that I don't really care for, but that's more of an "eye of the beholder" kind of thing. The biggest gripe I have with this guitar is that it doesn't come with a hard shell case. Instead, it had a gig bag, and I think that something of this caliber should at least have a real case to protect it.

The guitar sounds very solid. The first thing you notice is that it's fairly light and resonant. That's a big plus towards getting a good tone out of these guitars. The P90s in the guitar sound absolutely ripping, and they're pretty versatile. Don't expect these to be some super hot pickups; they're not. However, they can deliver one hell of a good rock tone. Put these through a cranked Marshall, and it's tonal bliss. Put them through a nice Fender, and you got some great blues and jazz tones. P90s really work great in these guitars, and I'm a big fan of them vs humbuckers for rock and certain types of leads.

For the price, this guitar is pretty much a steal. The biggest flaw is that it doesn't come with a hard shell case. That aside, it's a very good buy. I think everybody should at least have one P90 equipped guitar around for those silky, bubbly rhythm and lead tones.
Did you find this review helpful?yesno
»

lola781227's review (This content has been automatically translated from French)" Perfect"

The handle is very nice it is neither too thin nor too thick. The shape is just beautiful (as an LP in fact), and I can not find it too heavy a weight is 7kg standardized enough for an electric guitar.
This while accessing the fever is Assé dificil (especially when you have small hands) when I find the sound really great.

this guitar do fully agree to my style of music I play mainly rock and pop rock. to the sound when it is quite Crystaline.

I use it for the past 7 months and I do not regret my purchase. I try a gibson SG special cherry but I preferred the sound of P-90.

I like this guitar a lot in the micro and ebony fingerboard what I the least, however it is the paint tends to takes off because there is no varnish.
As for the money this guitar RAPORT worth and I would advise everyone.
Did you find this review helpful?yesno
»