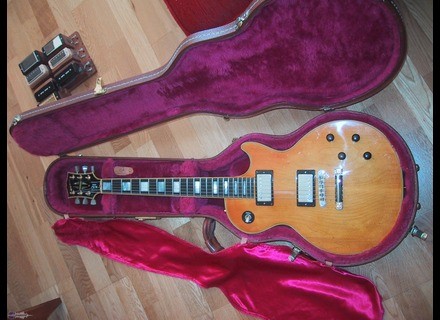 Gibson Les Paul Custom Micros Interchangeables
Mine is a custom, these prototypes out of the factories or gibson gibson cs are rare, often from the factory with just the fondur or over, there is no rule, most of them are standart of classic and more rarely custom. As these guitars were a showcase for some seller, they were particularly well chosen from the hundreds of guitars available. The prices recorded in 4000E 1800E go in office finishes that are made, usually after the factory. The model pictured was finished by hand, commissioned by the former owner and then displays a quality finish worthy of the best brand in its year (99-2000).

nothing to say about the "playability", y 'no two alike! lol but the LP is relatively comfortable.

All I can say is that I tested four prototypes lp interchangeable microphones is they are all well above his level, with this natural internal resonance that makes the success of the LP, what most modern lp appeared after Circus of the comercial Gibson (2005), even custom shop.