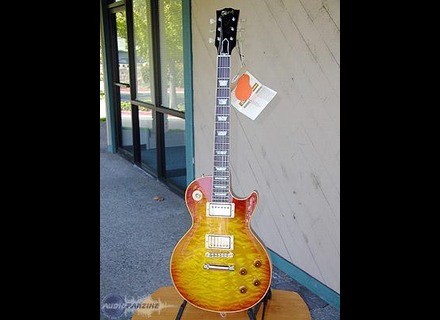 Gibson Les Paul Historic Standard 59
5
I absolutely love the Gibson Les Paul guitar. It has such a great feeling a great time that is just extremely appealing. Unlike the Fender guitars this one can get really thick and warm sounding. The Fender guitars are amazing guitars well but the primary stick to the mid range tones primarily because of the woods that are involved in the process of doing this guitars. Since this guitar has mahogany wood for the body and the neck he gives it is very sick and warm time.


I absolutely love the tone of these guitars when you use him in a good medium gain to high gain metal type settings. They excel very well when you get a lot of distortion coming overdrive pedal or distortion pedal or the amplifiers own preamp or power amp tubes. When you get a lot of thick saturation and distortion this guitar really sits well with that style. If you use in Marshall amplifier or Mesa boogie amplifier than this guitar is the next very well with the voicings of those amplifiers. Especially the Marshall amplifier because you're some type of chemistry that happens with that amplifier in this guitar. This is extremely versatile guitar but it doesn't really do that well cleaned settings.


I recommend this guitar to anyone is looking for extremely versatile guitar and it's going be a good recording guitar and a very good gigging guitar. You can find them very easily online and pretty much any guitar retailer in the world. These are fantastic instruments and if you can afford one and either recommend picking one up. For the money it doesn't really get much better than the Gibson Les Paul guitar. At new they come in right around $6000, so these are pretty expensive.
Did you find this review helpful?yesno
»

Gibson Les Paul Historic Standard 59
5
The Gibson R9 Historic Les Paul is a guitar that is designed and built by the master craftspeople at the Gibson Custom Shop. It came about as a guitar for the serious collector or player who wanted a near exact replica of the fabled 1959 sunburst Les Paul Standard, which many regard as the holy grail of guitars. It features many details that bring it very close to the original, such as the headstock decal, the pickups, the plastic parts, the finish, measurements, etc. It's really a guitar that the master builders went over with a fine tooth comb to make it as close to a '59 as they could. It features a mahogany body and neck, a highly figured maple top, cream binding, a rosewood fretboard with 22 frets and trapazoid inlays, Kluson tuners with tuliphead buttons, tune-o-matic bridge with stopbar tailpiece, and a pair of Gibson Burstbucker pickups that are wired to period correct electronics, including the famed bumblebee capacitors.

The design, unfortunately for us modern players who like lighter and sleeker guitars, really was never one that was built for speed. The best Les Pauls are usually on the heavier side and this one is no exception. The R9 features no chambering or weight relief - so it's a pretty monster guitar. The neck is fairly beefy on it as well, which might be a turn off for some more modern players. The shape is the same as the Les Pauls of today for the most part. The neck heel is somewhat blocky, impeding upper fret access, and the nitro finish can get sticky after playing for longer periods of time.

Getting a good sound out of this guitar requires little to no work. It's one of the liveliest sounding guitars I've had the chance to try. They vary a bit from guitar to guitar but for the most part they're some of the loudest Gibsons unplugged that I've heard. This translates well to a great plugged in tone for both clean and distorted settings.

The Gibson Historic R9 is simply a killer sounding guitar. Most modern Les Pauls are a bit hit or miss in their tones due to the chambering/weight relief or the pickups used. However the R9 just has a thick and pure tone that is what every Les Paul SHOULD be. When played unplugged, the notes bloom with a strong defined low end, biting midrange and a sparkling yet subdued top end that is totally Gibson. When the guitar was plugged in on a clean setting, I was greeted with a killer tone that was perfect for classic jazz or blues. This guitar has less high end than some USA model Pauls, so it doesn't do the funk/country vibe as well, but the classic Gibson jazz or blues tones don't get any better.

When hit with some distortion, this guitar is like a Lamborghini... it goes from 0 to 100 right away. The volume/tone pots are quite responsive and the guitar cleans up very well on even higher gain levels. The guitar is most excellent for classic rock tones like Jimmy Page's from early Zeppelin records or some late seventies arena rock like Thin Lizzy or Judas Priest. The pickups are quite dynamic and the guitar has a wonderful tone that sings with harmonics and overtones like a good Lester should.

All in all I think the Gibson Historic R9 is probably the best example of a Les Paul that you will find without buying a vintage one. At about $5,000 new it isn't cheap in the slightest, but the quality is stellar, and the tones are everything I would expect from a killer vintage Gibson. They are a great guitar for collectors or serious players who want their own Holy Grail guitar.
Did you find this review helpful?yesno
»

Aubertignac's review (This content has been automatically translated from French)

Handle very pleasant, ideal compromise between comfort and ease of play. All types of games are possible (thumb on top or back of the neck)
Limit access to treble over all Les Paul.
The instrument is quite heavy.
The sound is exceptional, powerful and bold, with clear bass and separate treble. The output level is ideal for providing a perfect balance, with lots of sustain.

I play Blues and Rock in its crunchy and in this case, the instrument is fabulous, with great harmonics and a very rich sound strained. The sensitivity every nuance is optimum, this instrument is perfectly spend the least variation in the game, and you can play with complete sensitivity.

I use this guitar for 12 years.
What I like most is the pleasure of owning a mythical instrument with which sonorits so are. I'll spare regret /
Did you find this review helpful?yesno
»