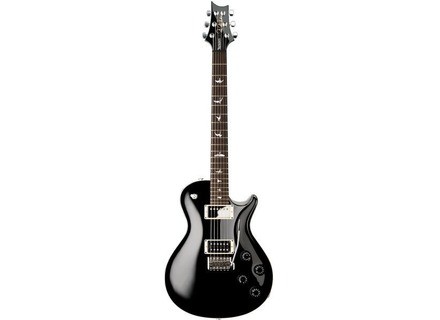 All user reviews for the PRS Mark Tremonti 10 Top - Black

PRS Mark Tremonti 10 Top - Black
5
Mark Tremonti is the former Creed and current Alter Bridge guitarist. He has been rocking the PRS guitars for quite a while now and he has had a signature model for a while. I finally get to play some of the real PRS guitars now that my shop is a PRS dealer. This guitar has a mahogany body with a mahogany set neck. The fretboard is rosewood with 22 medium frets. The neck has PRS's wide fat profile. The neck is also PRS's unique 25 inch scale. It has PRS in house pickups front and rear. The controls are unusual for a PRS since it has dual volume and tone controls. The neck is the Pattern Thin profile or what use to be called the wide thin. Up top you get the fancy Phase 3 locking tuners. The bridge is the PRS Fender style tremolo. The controls on this guitar are very Les Paul like. You get a volume and tone for each pickup and a 3 way toggle on the upper bout.

These guitars play great. If they didnt play great Tremonti wouldnt be playing them. The tremolos on these models are different than the normal PRS tremolo models. There is a cutout so you can go up on the tremolo so the tremolo is fully floating. With the 25 inch scale you get the unique PRS feel. It is between a strat and a Gibson. It is really nice and intonates pretty well. The locking tuners are pretty cool and lock in tune and lock onto the strings so there is no slip.

I thought Tremonti used a Seymour Duncan at least in the bridge. I guess not. These pickups are super hot for PRS pickups. The bridge pickup has a ton of bite and crunch. It doesnt have a cover so thats even more bite for your sound. These are pretty much metal pickups but they clean up well. The bridge is nice and thick and this pickup into a Rectifier is the Tremonti sound. The neck pickup seems to be a lead and clean only pickup. The neck pickup has a super clean sound and for fast leads it is very smooth.

There use to be a Tremonti model with a huge silly logo on the body. Im glad they are now making it just in black. You dont have to look like a billboard to play a good guitar. If you are a metal player this is probably the best PRS for you. Tremonti is a good player and know what a good guitar makes. If you are looking for a good singlecut PRS and are into heavier music this is the PRS for you.

I like to call this guitar the ‘shredder’s’ Singlecut. The new neck carve is amazing, and much faster than the previous wide-fat design. The PRS tremolo is an amazing design, and offers a lot more options in expression, with NO sacrifice to tuning stability WHEN SETUP PROPERLY. This is a must with this guitar, and the only additional hassle. When setup correctly for your tuning and string gauge, this guitar will not go out of tune, no matter how much you work the tremolo. Otherwise, in layout and design, the guitar stayed about the same. Full control over intonation is again available with this bridge design, which was a must due to all the alternate tuning and varying string gauges that Mark uses. The new Phase II locking tuners are much easier to use than the previous design, and offer the same tuning stability and additional ease in restringing.

From the original Tremonti model, the electronics and sound are the same. The PRS Tremonti treble is the hottest pickup offered by PRS, and thrives in a hard rock and metal application. Driving a Mesa rectifier, the sound is HUGE. The guitar marries clarity and depth in its sound, which can often be a difficult task with certain guitar/pickup configurations. The neck pickup, on the other hand, is very clean, and drives Mark’s clean sounds. Having heard any of his music (Creed or Alter Bridge), Mark’s clean sound has always been nothing short of beautiful. Between the two pickups, you can cover a lot of ground.

If you like the PRS Singlecut model, but want a more modern tone, this is your guitar. Players coming from a more ‘shred’ oriented background, such as Ibanez, will love the quick neck on this guitar. With the new changes, the Mark Tremonti Tremolo Singlecut is the perfect marriage of tone and play: the beautiful sound of a thick bodies mahogany PRS, with a quick neck and tremolo. Big and aggressive are the only way to explain the sound to expect.