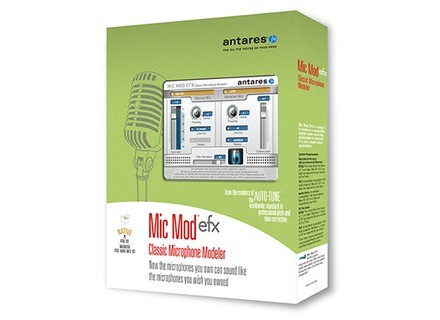 Antares Audio Technology Mic Mod efx
4
The Antares Mic Mod EFX is geared toward people that record at home and do not have a great microphone. I have used this plug in many times because during certain times of my musical career I have had to use microphones that are sub par. This plug in will give you the sound of a really good microphone by using a cheap one. I would use this plug in on my effects rack (whichever one that my microphone was connected to) and dial up the sound that I was looking for and it would instantly give me a better sound. I have used this software with a whole lot of microphones that cost less than 100 dollars and it would turn that microphone into a 300 dollar mic with no problem. I have also used this on a Mac and a PC and it ran perfectly on both.

Being able to choose your pickup pattern and filters right from this plug in no matter which microphone you are using is a great feature. This plug in gave me the ability to turn a cheap microphone into some of the microphones that I wish I could afford. Now it does not sound perfect by any means but it is a vast improvement from the way the cheaper microphone already sounded.

Installing it takes no time and it runs just like any other plug in does. It can run in VST, AU, or RTAS format and you can use it with any DAW that you want to.
This is a must have for anyone using a cheaper microphone; it is a way to get a higher quality sound easily without spending a boat load of money. This only cost 99 dollars, and even now that I have better microphones at home I still find my self using it to make them sound even better.