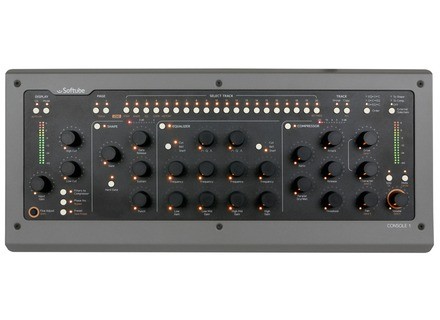 Console 1 mkII, MIDI Console from Softube in the Console 1 series.

All user reviews for the Softube Console 1 mkII

Softube Console 1 mkII
4
Used with a Mac and Studio One Pro 3.

It is a surface control with the specific controls of a channel strip organized into 7 sections:
- input level, low-cut and high-cut filters a phase inversion
- gate and transient control
- 4-band EQ with selectable frequences and Q…
- compression with selectable values for ratio, threshold, attack and release time (gain is automatic)
- controls for drive and character (the latter to provide an analog color to the sound) as well as output level, plus two solo and mute keys
Finally, on the up and down sides, two series of controls for tracks, presets or plug loading (I’ll detail these later on).

Nothing too fancy so far. There are some well-done video tutorials around.

The device is wonderfully designed, all made of metal with readable indications, quality knobs and control keys which are well enough spaced for anyone – even those among us with big fingers –, and LEDs everywhere to make it more readable.

Let’s get straight to the point.
This is a USB- supplied MIDI control surface with no DSP, aimed at controlling not only a collection of Softube plugins emulating professional consoles but also some Universal Audio plugins since version mkII.
Please note that:
- the SSL4000 plug-in comes with the device
- two other consoles are emulated, plus some sort of plugin recycling that can count as a third one (Summit Audio Channel). Other models are rumored to be in the making.
- All UAD plugs are not emulated, notably the channel strips (!!!) so check the list of available plugins
So if you’re not a UAD user, it’s not obvious that getting this device should be a priority for you. There are of course exceptions (listed below).

Depending on the piece of software that you use, you can control the pan, volume, select a track, solo and mute. Well, some DAWS but not all: so far, I believe Sonar and Studio One to be the ones with the best integration (though they’re not the most used.
Most parameters featured on the surface can be automated.

Regarding its ergonomic aspect, the manufacturing quality and clear (as well as rather classic) layout of the parameters make it a comfortable, intuitive (almost instictive) and easy-to-use surface.
But what makes a big difference is Softube’s cleverness to NOT hav but tiny or badly-oriented LED Screens, but to consider how obsolescent such screens are especially while such a device is bound to be used with a real screen. So? Well, just press a small button labelled DISPLAY and you get everything appearing on your screen – all controls, and even 4 display modes!

There are two annoying things however: the absence of a transport bar type control and of a motorized fader – a real pity!
That would have made it the perfect device. So yeah, I know, Softube has stated before that the Console 1 ONLY aims at controlling the parameters from a single channel strip… But that doesn’t rule a motorized fader out.
Finally, in a mixing context, a transport bar is useful, Native Instrument have understood the ergonomic interest of it as they have featured one on their keyboards.
While here, you’ll have to use your keyboard and mouse, or invest in a surface control with a transport bar and fader…
So, to make it short, a Console 1 mkII with a faderport behind would have been as close as it gets to plain perfect.

Now, one can wonder if it’s worth the €500 it costs. I’ll now get to what motivated me to purchase it.
First, the excellent SSL plugin that comes with it. As I have neither the budget (purchase, service…) or space to own such a console, a great emulation with physical controls (which is more or less what this product is about) is a real asset. But it’s of course all about tastes, so it’s up to you to decide if this is for you or not. This one plugin has replaced a whole series of plugins that I used before, it’s incredibly efficient and as usual with great plugins if you barely change one parameter and it sounds good then it’s great.
Also, I’m a UAD user… (a question of tastes, again).
Finally, I intend to buy an 8-fader controller anyway, but for a tight budget that could be a real issue!

Edit from September 2018:
This one is VERY sturdy: it fell twice from my deck – I have a 2-year-old daughter… Except for a slightly bent corner, it still looks in its prime! It would deserve an extra half-star...
View price information
Did you find this review helpful?yesno
Cookies help us improve performance, enhance user experience and deliver our services. By using our services, you agree to our use of cookies. Find out more.