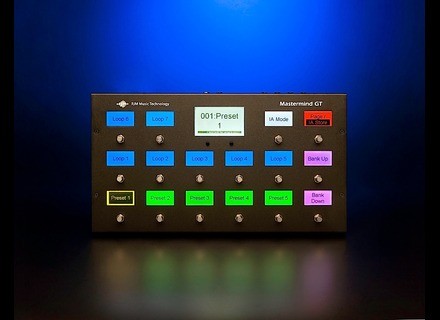 Rjm Music Technologies Mastermind GT/16
5
I wanted a new MIDI pedalboard to control my brand new Axe-Fx.
Experience has taught me that while playing in the night time is not a problem, playing outdoor and in the sun in something else: reading the indications on my previous MIDI devices’ screens was most often very difficult with a natural high luminosity, which had been a problem on multiple occasions. So I was after an easilt readable foot controller to come with my new “precious”.

RJM Mastermind GT pedalboards seemed to match my criteria, but it’s always difficult to know for sure without trying one, and getting your hands on one in France where I live was more than difficult…
So I decided to trust web reviews, and since the pedalboard is fully configurable this 16-button version seemed the most adapted to my expectations.

The pedalboard (which I bought from the brand’s official European dealer in Germany) comes in a sober (yet protective anough) cardboard box. Along with the pedalboard itselt, you get a power supply, a USB key that contains the software and a manual in English. RJM’s website features the latest version of the soft which can easily be used to load into the pedalboard.
I use the 7-pin MIDI connector for power supply. Be cautious as the phantom power mut not in any way get through the Axe FX, as the pedalboard’s consumption is superior to the Axe’s capacity. Adapters exist, but I made one for myself.
I added 2 expression pedals directly plugged to the MMGT. Be cautious again, as the jack connections must be crossed with those of the Fractal pedals.

The pedalboard’s configuration is very simple and rather intuitive.
The pedalboard is programmable, either autonomously using its buttons or using the MMGTEditor software through a USB connection.

For those who won’t bother configurating it, there are presets for a huge majority of controllable devices. Just select your device in the list (Axe-Fx II+ in my case) and all buttons are assigned to the maint functions with the right CC#. The two expression pedals that I’ve added are even already set up in the MMGT.
The pedalboard also can go further by controlling several devices. Pressing a single switch, you’ll then be able to switch the Axe’s scene, change a parameter then send other codes to other devices chained to it –MIDI switch…).
Each of the 16 footswitches can be configured, the actions, order, colors (On/Off independent), texts, control hold (and time), double click, button groups, macros, tuner, looper management and even more…
The pedalboard features its own configurable setlists (which I don’t use as I use the Axe-Fx’s order).

I play in a cover band. Each song on our setlist has its own preset. The Axe features 8 scenes per preset, but I currently only use 4 scenes at most per song. So, I remapped the bottom row with 5 scenes (one more, just in case – you never know) and the button on the far right of the pedalboard: Preset + (next song). Long button hold = previous preset.

The row next up to it allows to view and/or directly load the 5 closest song presets, plus a “previous preset” button (which is actually redundant with the long hold on the button downstairs, I may change it for a “preset #call”).
Finally, the 2 buttons on each side of the main display are used to launch:
- the tuner
- view of modify tempo
- access other pages (I set page 2 for a preset access via bank+/bank-, with presets 5 by 5), or direct preset call through its 3-digit number (the MMGT allows up to 16 pages).
- IA mode allows to access the Axe’s different blocks (which I don’t use while playing a song as I change scene instead – so two pages are enough for me)

The whole can be configured as you like. For instance, I set up two independent tuners, which is quite practical.
As I like to view the tuner during some solo parts and I’m used to play my solos in scene 3, I’ve configured the buton 3 so that it activates the tuner after sending the scene CC, while the 1, 2, 4 and 5 buttons set the tuner off. However, in between songs, I need to mute to tune my guitar. And as I’ve set the Axe so that it doesn’t mute in tuner mode (well, that’s not something you’d like during a solo, is it?), I set the tuner-dedicated button so that it sends the 0 value to the OUT1 & OUT2 volumes, and back to 127 when pressing again to exit the tuner mode.

I’ve only used this pedalboard for a few months, but it’s perfectly up to my expectations: configurable at wish and rather easily. Te displays are very easy to read, even in the brightest sunlight. The text is easy to read. At night or in dark ambiances, I set the luminosity down (as light, contrast and colors are all adjustable).

This pedalboard isn’t cheap, but to me it’s well worth its price.
What remains to be seen is how it lasts. The switches seem sturdy, as for the display (as many as there ar switches + the main display), time will tell.
Finally, the designers are very receptive and reactive – you just have to see how quick they react when someone asks for a precise improvement on the dedicated forum. Updates come in no time...
Did you find this review helpful?yesno
»