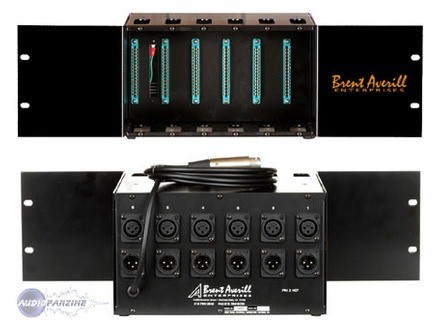 BAE Audio Lunchbox
5
The Brent Averill 500 Series 6 Module Rack is a simple Lunchbox style casing that, obviously holds six 500 series modules in it. It's got it's own power supply and phantom power built in, the former of which isn't always included in these casings. We have one of these racks in the C room at the studio where I work and it's filled up except for maybe one space. Each of the six spaces on here has it's own XLR input and output, and in total the entire rack takes up about three spaces in a traditional rack casing. There aren't too many other technical features to speak of other than that, as it's more or less a pretty self explanatory piece of gear. Each module fits snuggly into one of the spaces, which can be taken out and replaced at any time. That's really the great thing about the 500 series racks, is that you can pull and plug different modules at will and without any real effort. There are a number of companies that make these racks, but Brent Averill and API are the main ones, so if you're looking to put together a Lunchbox, I'd suggest looking into these two brands. The Brent Averill 500 Series 6 Module Rack is really as good as any of them out there, and although it's not quite as cheap as the API 500 Series 6 rack casing, it's still one of the most affordable ways out there to start a 500 series casing. If I were to start a new 500 series rack, it would definitely be between this one and the API 6 space casing. Either way you go, you can't really go wrong as the BAE 6 Module 500 series casing is absolutely a solid choice to get your new Lunchbox started...
Did you find this review helpful?yesno
»