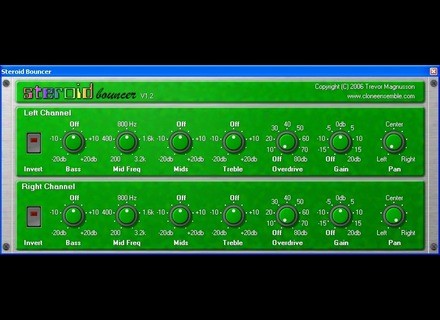 Clone Ensemble Steroid Bouncer
4
The Clone Ensemble Steroid Bouncer is a free plug-in for your PC if your DAW supports Direct X or VST plug-in formats. It's designed for a unique purpose - to help you manage stereo samples that might not be truly stereo. It's also to be used for helping to manage panning that's a bit out of whack. This provides an alternative to splitting the stereo track into two and working on them individually. The plug-in is available right from the Clone Ensemble website and is one of the few that's actually 100% free. The interface of the plug-in gives you independent control over the right and left channels, with the same parameters for each of them that include pan, gain, and overdrive knobs as well as bass, middle, and treble EQ control, with the middle band giving you control over the exact frequency you'd like to select. I don't think there's a manual for this, although one really isn't necessary.

I'm no longer running a compatible system for the Clone Ensemble Steroid Bouncer, so I haven't used it in a few years now. When I did have it, I was running it on a Hewlett Packard Pavilion dv8000 PC Notebook that had a 3.0 Ghz processor and 2 GB of RAM. This was enough to use on stereo tracks here and there in sessions, though I never needed to run more than one of them within a session. I'd be surprised if too many users out there had issues with it.

The Clone Ensemble Steroid Bouncer is a unique plug-in in best way possible, as I don't know of too many plug-ins out there that function like this one do. The only bad part about the plug-in is it's compatibility, as Pro Tools and Mac users won't have access to it. For those who do, it's definitely one worth having around. The processors aren't the best sounding out there, but it's definitely good enough for leveling out unbalanced stereo tracks in the form of samples or otherwise. This should save you a bit of time here and there, but those who can't run it aren't going to lose any sleep over not having it.
Did you find this review helpful?yesno
»

Other Clone Ensemble other Effect Plug-ins