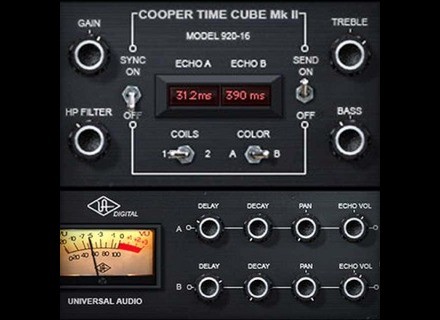 Universal Audio Cooper Time Cube Mk II,
4
The original Cooper Time Cube was a Duane H. Cooper and Bill Putnam col- laborative design that brought a garden hose-based mechanical delay to the world in 1971 and has achieved cult status as the most unique delay ever made. The Cooper Time Cube is famous for its spectacular short delay and doubling effects and its uncanny ability to always sit perfectly in the mix. How- ever, the CTC had limited practicality as a full-featured delay; only 14, 16 or 30 ms settings were available. Over the years this quirky device has grown a strong following and finds a home in the most prestigious studios in the world, such as Blackbird and Sunset Sound. Top producers and engineers such as Richard Dodd, Vance Powell and Joe Chicarelli still swear by the Coo- per Time Cube for its unique character.
The Cooper Time Cube MkII has all the sound of the original delay system de- sign and offers all the necessary features expected from a modern delay de- vice. The distinct sound of the single or double hose Coil is preserved regard- less of delay setting, and either sound is available at the flick of a switch. The Cooper time Cube MkII also incorporates other enhanced tone shifting fea- tures such as the Color switch that presents the user with the original (A) or “leveled” (B) frequency response, plus tone controls and a 2-Pole High Pass Filter. Lastly, a switch is presented for soloing the Wet signal, and the Send switch disables the signal being sent into the delay processor.

The original UREI/Universal Audio Model 920-16 Cooper Time Cube hard- ware has two audio channels, A and B. Each channel is transduced to/from a coiled length of plastic tubing which provides the acoustic “sound columns” that define its dis- tinctive sonic character.
The coils for each channel are at fixed but different lengths, which define the available single delay times of 16ms for channel A and 14ms for channel B. The two channels can be cascaded in series via external routing, for a total available delay time of 30ms at reasonable fidelity for its era, which (accord- ing to the original product brochure) “brings complete respectability to the heretofore marginally feasible acoustical delay line.”
The UAD Cooper Time Cube plug-in has all the vibe of the original, with mod- ern feature enhancements. It is a true stereo plug-in with two independent de- lay processors. Each channel has its own set of controls, and there are global controls that affect the plug-in overall.

The plug-in pretty much functions...AND sounds like the hardware box. A fun plug for guitar...and even more fun for Dub delay stuff.
Did you find this review helpful?yesno
»

Published on 03/26/09
The Cooper Time Cube Mk II includes a 14-day fully functional demo and is now available for purchase to UAD-2 owners for $149.

Other Universal Audio other Effect Plug-ins