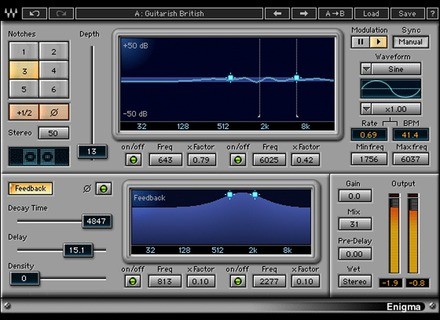 Enigma, Other Effect Plug-in from Waves.

View all offers for Waves Enigma »

Waves Enigma
5
The Waves Enigma is a crazy hardcore modulation effect that utilizes different LFOs reverbs, filters, feedback loops and all kinds of other stuff to create some of the most unique and bizarre modulated sounds you've ever heard. The layout itself is pretty complex, and there are ton of options to choose from. The main portions you'll be dealing with are the notches, modulators and feedback sections. These are what you mainly use to get the sound you're looking for. Because this is so hardcore when it comes to its interface, I recommend trying to find some online tutorials on it and following along. It'll help explain how everything works a bit better. I've never read the Waves manuals, so I can't comment on those. I never experienced any issues when it came to setting it up since Waves plugins are very simple to install and are compatible on nearly every machine today.

Waves plugins are always rock solid. They're known for being super stable and never taking up too much memory inside your DAW. This is especially necessary when you start using multiple instances of plugins. I run a Mac Pro with OS 10.6.x, and my main DAW is Logic Pro. Everything worked fine, but these plugins are 32 bit only. While it's not a big deal with Logic thanks to their 32 bit bridge, it's still somewhat disappointing since everything is 64 bit today. Hopefully they'll fix that with the next major update. I've had the Mercury bundle for probably half a year or so, and I've always received excellent support from the guys over at Waves.

This is probably one of my heavier used plugins by Waves simply because it can do so many things. I can create everything from a simple modulated delay to some insanely bizarre sound effect that makes it sound like the earth is ending. I highly recommend checking this plugin out.
Did you find this review helpful?yesno
»

Waves Enigma
5
Waves’s Ltd. Enigma plug-in is one that comes in most Waves plug-in bundles and is available in all plug-in formats. It’s a unique plug-in in that it can do a variety of things, but isn’t necessarily a multi-effects plug-in. In fact, the name Enigma suits it quite well. I wasn’t involved with installing this plug-in since I don’t own it and have only used it in a professional recording studio. There’s definitely a good amount going on with the interface, as it took me a couple of uses to understand it all, and I’m still learning things about it with each use. It’s basically split up into three different modules – a notch filter, a modulator, and a feedback section. It’s definitely a lot of trial and error with this plug-in, as it isn’t exactly clear what everything does right off the bat, or at least it wasn’t for me. A manual might be a good idea to have around, although I didn’t share this luxury when I was trying to learn how to use it.

I’m not running this plug-in on my home studio, but I’ve used it in a professional studio where it was a Pro Tools HD based system. It wasn’t at all a problem to run this plug-in within Pro Tools HD, although I can’t speak to how well it might run if I were to try it on an LE system or something comparable. It’s hard to say how well this plug-in would run on any given system without actually trying it since I haven’t tried it on an LE type system…

The different types of effects that are available with the Waves Ltd. Enigma plug-in range across the board from filtering to modulation effects to an LFO. It definitely takes some time to get used to it, as it isn’t your typical plug-in by a long shot. It’s awesome for experimenting, and is usually something that I’ll use when I’m not quite sure exactly what I want but I know I don’t want something ordinary. Waves plug-ins usually aren’t cheap, but I don’t know what the price would be if you were to buy this plug-in on it’s own. I can’t say that I’d recommend it for a home studio owner, but if you’re a professional who wants to add a unique plug-in to the mix, this plug-in could just be perfect for you.
Did you find this review helpful?yesno
»

See all 33 photos of Waves Enigma »