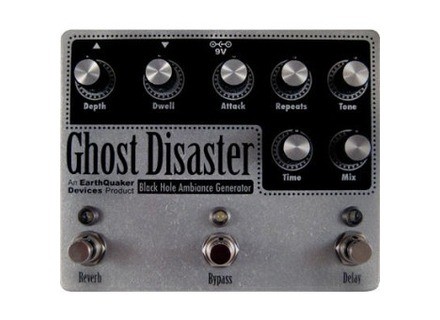 All user reviews for the EarthQuaker Devices Ghost Disaster

EarthQuaker Devices Ghost Disaster
4
The EarthQuaker Gost Disaster Synthesizer is actually a guitar pedal as well as a synthesizer. It functions like a guitar synthesizer, except with one crucial difference; it doesn't need a special synthesizer pickup! No, this pedal simply uses the pickups on your guitar instead. This pedal is not capable of being edited with a computer, and is not MIDI-capable. I'm not sure whether or not it is an analog pedal, but I believe it is, since it sounds a lot like an old-school analog synth. This pedal is not rackable.

The editing of effects on this pedal isn't too difficult. It's got a few more features than most pedals, but that's because it has a pretty broad range of possible sounds. It is controlled mostly by faders. The first fader is a master volume. The next four faders control the mix of octave effects on the signal. There is a fader for sub-octave (or an octave below the signal), a fader for the original dry signal, a higher octave fader, and a fader for the "square-wave" signal. The square wave signal is what makes the signal come off as very "synth-y". There is a fader for attack delay, which basically allows you to fade in with every note played (this creates awesome synth effects). The remaining four faders control the envelope, and the rates at which it is filtered.

The sounds that come out of this are pretty cool for the most part. It actually has a few that really do sound like an analog synth from the late 70s/early 80s. There are some other tones on it that really also give you a great sound. Between the octave effects and the envelope filtering, this thing gets some pretty cool sounds. The fact of the matter, however, is that there are a lot of people who wish to emulate the sounds of other instruments on the guitar. Unfortunately for them, this pedal has no way of doing that. It simply emulates the Moogs and other synths from the days of old. This pedal really colors the sound drastically, which is sort of the point. If that's a problem for you, avoid this pedal. It's also not true bypass, which means it slightly colors the signal even when switched off.

I think that this is a pretty cool box for guitarists. My main beef with it is that chords, with the exception of power chords, almost always come out sounding kind of crappy. It's mainly a single note, power chords type of box. Also, the price almost makes this not worth it for me, and I'd almost rather buy another synth than buy this. Regardless, this is still a great pedal, and one that certainly can be very useful if you know how to use it.

EarthQuaker Devices Ghost Disaster
5
It's a double pedal with reverb and delay.
It's 100% analog.

This pedal is excellent for reproducing the spring reverb and tape echo. It is definitely geared towards vintage sounds.
The design quality is there. No breath, no unwanted buzz.

This is an excellent pedal. Very good source for money.