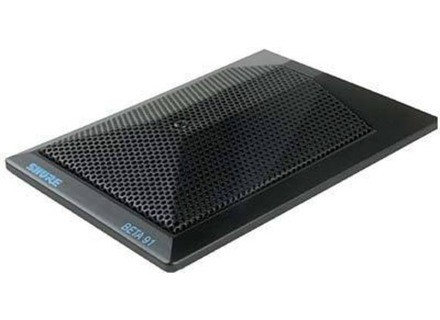 Beta 91, Other Microphone from Shure in the BETA series.

Shure Beta 91
5
The Shure Beta 91 is a unique boundary condenser microphone for use in the studio. I’ve only used this microphone a few times, but it’s the best of it’s type that I’ve used. It’s got a very high SPL capability as it can handle very loud signals. It’s got a half cardioid polar pattern, which makes sense considering the shape and design of the mic. It’s got a frequency range that goes from 20 Hz to 20 kHz…

The Shure Beta 91 is a really cool microphone to have around the studio. An outside engineer recently brought the mic into the studio where I work at, using it on the inside of a kick drum along with a Shure Beta 52A on the outside. I’d used boundary mics like this before, but not really for recording kick drum and have to say that I was thoroughly impressed. Between the Beta 91 and the Beta 52A on the outside, we got one of the most well rounded kick drum sounds I’ve heard to date. The mic is definitely going to be suitable for applications beyond just this, as boundary mics in general are great for picking up ambient sound in a room as well as for speech and conferences. They do now have the Beta 91A, although I can’t say if there are any major differences between the two of them. Although I’ve yet to have the means to try this theory, I believe the Beta 91 is a very versatile microphone and will most likely sound good for no matter what you use it for, although due to it’s shape and design it’s not going to be best for a lot of traditional applications. For what I’ve used it for, it really has a clear sound and another upside to the mic is that it’s super easy to place as all you need to do is set it down. The Shure Beta 91 is definitely the ultimate mic of it’s kind and worth exploring for all interested in a boundary mic.

Shure Beta 91
2
The beta 91 is a capacitor for the bass drum. It's really limited as applications. I would say to the bass drum metal, etc.. The earlier opinion gives very good product, no need to repeat the things I think he said.

It is not versatile, it's the least we can say. I've had six months. I recorded several large boxes with. It was a mistake. I prefer 1000 times the D112. Filtering as is customary in the trash, metal, ska-punk, etc., the D112 has the same result. However, without filtering, the D112 also gives a good result. This is not the case so that the beta91 planed down medium it sounds "too much" typed double pedal. Of course it's a matter of taste. It is subjective. I keep it in case the customers really want. Personally, spontaneously, I surely will use it more. Yet it is not jazz we are used to record the studio horlebaix.

jozegarage's review (This content has been automatically translated from French)

Shure Beta 91
5
I am a sound engineer, I used and I use the beta91 and prdecesseur, the SM91A. There were two versions of the SM91A. This condenser microphone is interfaced with a micro prampli spar, food in 24 or 48V phantom before connecting the XLR console.

The first was prampli Submitted as a heavy box size pack of smokes, he found it an inverter attnuateur gain and a filter, a mini-XLR mle capsule / pramp and XLR pramp mle / console. He then became volumes and a cylindrical housing that can be plugged directly into the shoe scne or console. The rglages of pramp disappeared.

Without addressing the quality electro-acoustic versions of SM, as regards the hardware itself, the criticism that one could make is that the cable provided to connect the microphone to pr amp section had a "scary" as it is silent end. When we know that the primary operating mode is the sound, not the studio, when a little connate scne, we quickly understand what I mean, we prfre the hardened to Balza in this world of brutes. However, I always tonn t by the good performance of this little extension, but I took care of it.

As for the disappearance of two inverters that make a attnuateur gain when the level reaches 156dB maximum pressure, the nominal level of work at around 125dB. When the filter, the brackets are sufficiently provided, no need to add an inverter that could DGRAD the quality of the signal.

Today, the Beta91 still has its mini XLR, half mtal, half plastic, but the section of cable has at least doubled according SHURE, MODEL named the Triple-Flex represents a very s improvement over its prdcesseur.

Now the diffrence between SM and Beta? but why he SHURE DGRAD the quality of its flagship MODELS? intrt what? the effects or musical instruments are sorry for the quality or default antrieurs qualities that became, perhaps, but a microphone, asked to be good, even if we introduce some deliberately bumps frquences prcis purposes, the quality intrinsque must evolve to research gr.

I think some will like to take the cabbage and the myth and legends have a sharp tongue. I dfie anyone to make the difference in sound between the two in the blind-test. I would say, for against, the Beta is amliore at suprieures reproduction of harmonics, but it can essentially be taken out in piano and only under certain conditions, rarely sound less than have exceptional acoustic conditions ... rare, and remains subtle trs trs.

! As for the quality of sound recording, in sound, I can not find anything equivalent in this price range, absolutely nothing!

attacks are clear, the quality of restitution of stamps, increasing its ability to eliminate noise, used to shape and enrich the sound without restraint. The signal / noise ratio makes it a great studio microphone also.

Personally, if I buy this kind of micro, j'viterais parks lease, it may be rinsed well, otherwise why would they sell. The problem is that we find little resale.

So choose the most micro nine possible to avoid surprises. Warning the state of the guard, I recommend choosing the "nickel" shots without apparent or rust.

If the need arose, I Rasht this microphone, without any hsitation, duly for the price. And remember that a can not buy a microphone stand and saw the price on the right foot, may be rflchir ... Just do repossi on a good thick, soft foam kind, blanket or duvet.

Preferences, choose a Beta with the new cable for increased reliability.

entoine's review (This content has been automatically translated from French)

Shure Beta 91
5
Good manufacturing quality that inspires confidence (though dense). no problem use.

Used on the bass drum made of rock, funk, pop rock.
Used in connection with a D112 it helps to bring the attack, the D112 captures the roundness and the note was. Excel in this use, the bass drum is trs trs prcise and dynamic drills without a problem in Rock mix. Ds that we cut the track of the Beta 91 you cry means more than the bass drum. (If we cut the D112, you lose the bass and it is also cata, it is the combination of two microphones that works and allows a good rsultat trs trs quickly)
It is impossible for me to get the same with a single micro rsultat D112 type, both of attack would bring out the cymbals, snare and other ... and a gate if it can help a little will not make miracles.
For jazz I would prefried a conventional static (I often use the ADK A51s), its more open and even to capture the nuances and harmonic richness of jazz bass drum (often white skin rgl e with a sound that has much of its skin)

other micro trs works well for bass drums and is considered as a single microphone + Audio Technica ATM87, most serious fuller sound, but unavailable.

not given but the quality is still paying.

Other Shure other Microphones