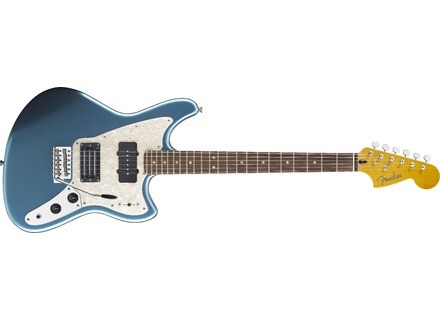 Fender Modern Player Marauder
4
The 'Modern Player' series are the first series of Chinese manufactured guitars carrying the Fender brand name. Although the Squier 'Classic Vibe' series already showed how good Chinese guitars can be, you still could have the feeling that something was missing. The Marauder however is the next step. It reminded me a bit of that morning in 82 when I bought my JV (japanese) Jazz bass!

Some of the external characteristics of this guitar are inspired by the 60s Fender Marauder. This 'Original' Marauder was never produced in large numbers. The Modern Player Marauder inherited the thin body and the headstock logo ('Fender' is the only word). The body shape is new, somewehere between a jazzmaster and the old Marauder. The electronics are a completely new design. The pearloid pick guard gives the guitar a classic appearance.

This guitar is set up quite well. That, combined with the jumbo frets, makes it very easy to play. Balance is good, with only a very slight hint of neck-heavyness if played standing up. The C-shape neck has the right thickness for most players and provides a sensible compromise between playability and stability/sustain. Neck, tremolo and tuners look and feel like a vintage reissue strat, except for the jumbo frets.

The tremolo is the weak spot of this otherwise great guitar. You have to use it carefully, else you will detune your guitar. A pity they didn't use the Squier standard series tremolo, which is cheap, good also Chinese.

As soon as you pick up the guitar, you feel that it wants to be played. This is quite different from many of the affordable USA strats (costing at least three times as much) which sometimes feel like a reluctant piece of wood. Even if played acoustically, the Marauder has a bright and vivid tone, which translates in an excellent sound when amplified.

Actually all these sounds are quite impressive and extremely useful. Sustain is better than my strat. Unbelievable that such cheap and light-weight instrument can sound like this. B.t.w. I play in on a 12" 30W tube combo, but even on the cheap 10W transistor amp in the shop it sounded great.

It cost only 395 Euros and since I bought it, my E-sries J-strat hasn't left the gig-bag. If you like Fender guitars, you can not afford to miss this one. Mark my words: this first series of Marauders will all be collectors-items within 10 years, much like the JV series of 82. So grab one while you still can. On the other hand, I believe that if you are a shredder or a true 'Gibsonist' this guitar is nothing for you. Except for the tremolo, which should be best left alone, this is an excellent guitar. This is the first guitar ever which gives me a combination of bright and glassy chords and a fat and solid lead tone.

Over the two guitars I tried, quality was very consistent. So I chose the blue one. . .

heads on fire's review"This guitar is UGLY, yet awesome!"

This guitar is so weird! It is one of the most bizarre mainstream guitar designs I've seen in a long time, and it is strange to see it coming from Fender now. They've been pretty traditional with guitar designs for quite a while, and this looks like a Jazzmaster and a Mustang got together and had a baby in the back of a pawnshop. The neck plays well, and the guitar balances nicely.

First of all, what the heck is a triple coil rail pickup? While it may be so bizarre-looking, it is a very clean, compressed sound - incredible for country spank. But with some drive, it sounds excellent for rock leads and riffs. The Jazzmaster pickup has sweet warmth to it as well, and will haunt you with it's angelic sustain.

This guitar won me over. I saw it, was revolted, then I picked it up. As weird-looking as it is, it is a great player, it is super versatile, and it sounds amazing. I'd pick this guitar for anything except the most technical of metal styles. Nice job, Fender! Keep making weird guitars!

Lucifer1969's review (This content has been automatically translated from French)" What happiness!"

Fender Modern Player Marauder
5
The series "Modern Player" is the first series of guitars produced and manufactured in China with the Fender brand name. Though Squier series "Classic Vibe" has already shown how good Chinese guitars could be, you always had the feeling something was missing ... <div> The Marauder is however moved to the next step. It reminded me a little of that morning in 82 when I bought my bass JV Jazz (Japanese)!

Some of the exterior features of this guitar are inspired by the 60's Fender Marauder. The "Original" Marauder was never produced in large numbers. The Modern Player Marauder has inherited a thin body and the logo 'Fender' (which is the only word written on the sleeve). The new body shape is somewhere between a Jazzmaster and the former Marauder. The electronics are completely new design. The pearl pickguard gives the guitar a classic look.

This guitar is good design. Mounted jumbo frets, it is very easy to play. The balance is good, the head is a little heavier, you feel if you play standing. The C-shaped handle has the right thickness for most players and offers a good compromise between playability and stability / sustain. Channel vibrato and mechanical stress strategy vintage reissue, except jumbo frets.

Vibrato is the weak point of this guitar. You must use it with caution, otherwise you detune the guitar. Too bad they did not use the standard tremolo Squier series.

Once you pick up the guitar, you feel that it begs to be played! <div> This is quite different from most U.S. strats "affordable" that cost at least three times and it sometimes feels like a piece of wood reluctant. Even if it is played acoustically, the Marauder has a bright and lively tone, resulting in excellent sound when amplified.

Location of microphones:
, 1. Humbucker full more fat than a Strat
2. Crystalline like a Strat
3. Clear and limpid as a good Strat middle position
4. Humbucker thoroughly, ultra clear tone </div><div> 5 Humbucker thoroughly ideal for chorus., </div><div>
In fact, all these sounds are quite impressive and extremely useful. The sustain is better than my Strat. Incredible that such an instrument so cheap and so light can sound like that. I play on a 12 "combo 30W lamp, but even on the amp transistor 10W cheap in the store, it sounded fabulous.

It cost me only 459 euros and since I bought my E-sries J-strat has not left his gig-bag. If you like Fender guitars, you can not afford to miss it. Well Notes: This first set of Marauders will be collectibles in 10 years, just as the JV series 82. So grab it while you still can! <div> On the other hand if you are a true Hardos or "Gibsonist" this guitar is not for you. </div><div> Apart tremolo best left aside, this is a great guitar. This is the first guitar that gives me such a combination of sounds so clear and crystalline, very fat and rocky
Two guitars that I tried, the quality was very consistent.

SlapKid's review (This content has been automatically translated from French)" Yes violin, electronic p ... no!"

Fender Modern Player Marauder
2
Tested half an hour in the store, placid blue model (more beautiful than in the picture, the lower cut makes much better).
China and so much the better, the handle has the same feeling (wood, varnish, density, strength) than my stagemaster7 that has not changed in almost ten years.
Diapason normal strat, but curiously it does not go to the west despite the location of the bridge "the sg" (compared to pressing the thigh).

Frets copies, very good (nothing to do with the highway ... or MIM) finished.
Important: the handle is gloss, it changes a lot of the usual (for the better but this is personal).

Vibrato strat low end, disappointing both agree that keeping comfort (happily Charcute your right palm) and it emits more noise resonances not pretty at all, no.
I would have preferred a VIBRASONIC (mustang), but my God it costs 03.01 euros probably more ...

Microphones bizarre triple blade jazzmaster bridge and neck, absolutely not match the guitar is ugly as can be, that white coutait what else?

Selector to misplaced possible, we can not complain they could put on the back ...

Feeling good, it sounds good vacuum (except springs), the handle is a delight to play as well in the paw round, the body is more balanced than it seems, as nice guitar.

Kind enough to not stop playing with.

The model tested was a disaster-mail.

First, the micro bridge not working, then the remaining cracked / broke off shortly, there have been short all replace / resolder and the base price of 440 roros is out of the question to slam 200 more ...

Wake up, it's a guitar china to handle screwed, not to any fact at my jack / danny green surf to 99 euros in the state. The shouts Fender advertising will not change anything, the sticker on the head either. Unless you pay 340 euros, pub managers ...

Had it been 2 times cheaper I would have bought and replaced the electronics, because the violin is healthy and downright fun to play, and splendid color.

In the state I would have been marauder ...

7 of 13 people found this review helpful

Did you find this review helpful?yesno
»
Read the 7 user reviews on the Fender Modern Player Marauder »