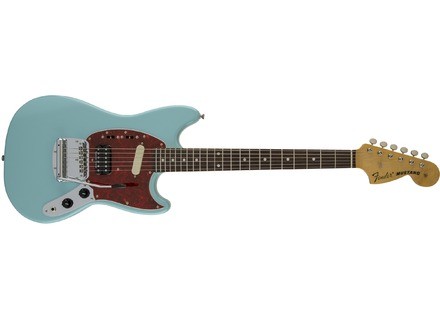 Kurt Cobain Mustang, Other Shape Guitar from Fender in the Mustang series.

Fender Kurt Cobain Mustang
4
Kurt Cobain was known for his fender guitars throughout his career. Mostly the Jaguars and the Mustangs. Early on he played the Jaguar and later on he played the mustang. Fender came out with a Jaguar Kurt Cobain signature last year and now they have a new Jaguar based on what he use to play. He played made in Japan Jaguars and these guitars are made in the same factory his was and they come with the same mods from the factory. With this guitar you get an alder body in the small Mustang shape. The neck is a 24 inch scale maple unit with a rosewood fretboard. The fretboard has 22 vintage frets and a 7.25 inch radius. The phase switches are recessed to simulate Kurt cutting them off without having to make them unusable. The neck has a large headstock with vintage tuners. The bridge is a tune-o-matic style bridge. The pickups are Kurts preferred setup. The bridge pickup is a Seymour Duncan JB while the neck pickup is a slanted single. The controls are typical Mustang with the crazy phase switches no one uses on the top of the pickguard. The other controls are typical with a volume and tone.

This is by no means a shred guitar. It doesnt really have the construction for shredding. The neck is only a 24 inch scale so it can be kind of cramped up in the high end. The frets are a lot smaller than what you normally find on modern guitars as well. This is all topped off by the 7.25 inch radius. Modern shred guitars usually have like 15 inch radiuses so this fretboard has a very vintage round feel to it that doesnt help you get a low action. If you arent planning on shredding on the guitar it is alright. It is great if you are a smaller person or a girl and you need a guitar that you can easily handle. The short scale on this guitars means people with smaller hands can play it easily.

This guitar has a really raw punk rock sound. This guitar isnt really for clean tones and shred tones. its for power chords and riffing. The shorter scale and looser tension on the strings give you a bit of a thicker tone from the guitar. The bridge pickup is mounted directly into the body and not on the pickguard so you get a more direct and woody tone. The JB is a classic bridge pickup. Kurts older guitars used Dimarzio Super Distortions. Its nice to see Fender being accurate with these mdoels. They easily could have thrown in a generic hot Fender humbucker in the bridge.

This guitar is meant for hardcore Cobain fans but it is not super expensive like older models so younger players can still afford it. Since this guitar doesnt have any crazy signature markings it can be enjoyed by people who arent particularly Nirvana fans. If you just like Mustangs in general you could enjoy this guitar for having a heavier sound than your typical mustang.

Vosraider's review (This content has been automatically translated from French)" Amazing !!"

Fender Kurt Cobain Mustang
5
-Fabriquée In Japan in the same factory as that of Cobain.

-The Bridge is better than that of a standard Mustang, it is actually a copy of a Tune o matic which guarantee stable tuning.

- The handle is typical of a Mustang with a C-section, and maple with rosewood fingerboard.

-There Are 22 frets, we handle a microphone neck Mustang for the bridge was a Seymour Duncan Jeff Beck.

- There is a volume control and one for the tone, the selectors are a classic Mustang (2 selectors, and out of phase).

-The Handle is very good, the radius makes it perfect for those with small mimines like me, provided it is quite complicated to play in the treble or to shred (it's not a guitar made for it.

-The Guitar is light is balanced, ergonomics makes it easy to handle.

-As Said before, access to the latest frets can be a little tricky, but it happens to all with perseverance. We can easily get a good sound provided you have the stuff behind.

-This Is suitable for use skyscraper that I made, namely Blues, pop up the big rock.

-Its Config makes it very versatile, with the bridge was a hot clean sound with very roots grain, when a neck allows it to have a more clear, less round, the sound of a simple sum. Combining the two results in a sound close to a telecaster bridge, but with more mid and dug a volume faible.Pour more saturated sounds, with the bridge can go without problem slight crunch to fat saturation by Forgot against metal, the microphone is too limited and its grain is anyway too vintage for the big rock against it by the top.
The neck, saturated allows to do a little dirty blues to the White Stripes, among others.

- I use a Laney CUB12 lamps
-Mis Apart from the combination of the two microphones that produces sound a bit tinny everything I like.

I use it for several months, I have already tested the high gear range and this guitar was not ashamed of the comparison, it is very well finished and dethrones many American. I like its atypical side, his side rock'n roll assumed, in my opinion this guitar is not reserved only for fans of Cobain, his config makes it versatile and can adapt to many styles (blue, pop, hard, grunge, jazz ...). Moreover, this versatile guitarists who performed concerts not bother lugging fifty guitars if it does not feel like it, which is pretty good.
I bought 700 euros occas almost new, value for money is pretty good. I remake that choice without hesitation, especially since the color (sonic blue with red tortoise plate) is beautiful and is no longer produced for this model.

Published on 01/16/12
The Kurt Cobain Mustang pays tribute to a model that the Nirvana star favoured throughout his career.