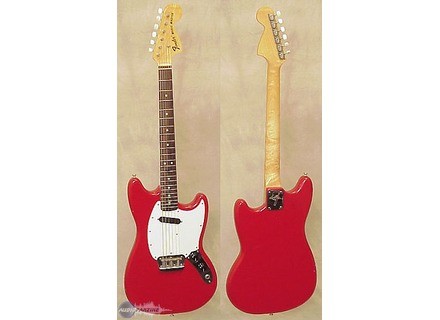 Musicmaster [1964-1982], Other Shape Guitar from Fender in the Musicmaster series.

Fender Musicmaster [1964-1982]
2
The Fender Music Master is a guitar that was introduced by Fender in the late fifties to have an instrument that was very simple in the features department (and in the price department) for the younger starting player. It also features a shorter scale than your average Strat or Tele, which makes it a cool choice for someone with smaller hands. It features an alder body, a maple neck with rosewood fretboard and 22 frets, standard Fender tuners, a hardtail bridge, and a single coil pickup in the neck position wired to a simple volume and tone control set. The CBS era guitars are much clunkier than their predecessors, which could also mean that contouring in the bodies went away or got more slight. They were built in the US of A.

The design of this guitar is ergonomic enough. Certainly the smaller design was something that would definitely appeal to players with smaller hands or of a more diminutive stature. It's reasonably lightweight, and the balance of the guitar is pretty good too. The CBS era models I've tried tend to be a little clunkier and a bit heavier too, which is just a sign of the times I suppose. The upper fret access is not too bad on these guitars, but it's not great, nor was it intended to be, as most beginners are just tending to play on the lower frets. Getting a good sound out of this guitar is not really hard, though it only has the one pickup, and a single coil at that, so you aren't looking at a very versatile ax, just something to do a passable clean and a bassier overdrive tone.

This guitar is a pretty simple instrument, and that transfers over to its tones. This model is loaded with a single, stock Fender single coil. The CBS era of pickups really was not all that stellar. I didn't particularly find the tone all that remarkable. Plugged into a clean amplifier yielded a bassier, yet still somewhat bright tone that was sort of reminiscent of a Strat. It didn't have a lot of bite or girth to it though and I can't say it works for any particular style, just as a generic clean tone from a single coil to play on. The drive tones are not bad, but the pickup is fairly noisy and there's not a lot of brightness to get harmonics or anything for rock music. It's really only worth using in a grunge or punk context where the tones are not of the concern, but rather just having something loud and brash for jumping around.

All in all I think this guitar is an interesting yet not very useful piece. The CBS era models are not made all that well and the tones really don't make me want to run to buy one. Once the novelty of it being a US made vintage Fender wears off, you start to see that it's just your average guitar. It might be cool with some mods, but then you're sinking more money into an instrument that might be better left just hanging on the wall to say you own a vintage piece... who knows?
Did you find this review helpful?yesno
»

didi2's review (This content has been automatically translated from French)" A VINTAGE FENDER AFFORDABLE!"

Channel dream comfortable as a Cadillac 57 '! Too bad it's so short (21 frets). Balanced guitar with access to acute "stratocastérien". For 50 years, we have found different tricks to make it more feasible these famous little boxes that are becoming smaller from the octave. If you have called "extensions doigtales" prostheses (If it exists! M'l'a It says that), do not hesitate.
For sound, two buttons and a volume and tone. Normal. There is a microphone. Not stupid.

I hear "This is the guitar that makes the sound." True. Still, you would put Senna in a nice car, it would end just ke Grand Prix of Brazil ...
The sound is a crystalline, a truly incredible clarity, an unfathomable depth! Attention, the handle does not support something like that. Beware: it refers to any microphone that does not hesitate to throw it all on the road! But if you're a lagoyesque or satrianesque accuracy, you just make yourself a friend, the handle!
For sound, I plugged into an old Fender (incredible, is not it?) Or on the Mesa F50 and ... Hmm ... at the table! Yum, yum ...

I bought the beautiful (well, a little torn still see photo) about 5 years ago (it dates from 1961). Five years of shared pleasure (shit would still I think to ask him if his side ...), complicity and bursting! Because the icing on the cake, with two pots of the guitar and the gain of F50 donf, with some adjustments equal, the grandmother found fishing 20 years, the hendrixiens accents! True! It almost bite! Well, it does not take hours without detuning. So after having played and abused, the lie. You saw the original box? Leo and his descendants would have predicted the longevity of the Musicmaster and install, its pretty little head, a cushion. I tell you, there is more respect. Everything is lost.

elfreddo76's review (This content has been automatically translated from French)

The handle is a handle strat typed, very nice and very playable.
Access to the treble is nice, but hey, qd c not even a guitar "highway"
The weight is light (well, for me, lol!), So no back pain or shoulder after 3H repeat and two together.
No problem with fixed bridge detuning

For audio, you and it sounds formwork.
since there is only one microphone to the handle, I put 8, and the sound is hot. Good for blues and rock, not too much for the metal. For Nirvana, it's not bad at all.
I added a Hot Rail in bridge I split, and there was a super versatile guitar.
I Banchee several amps (Carlsbro 76, H & K vortex, Fender Pro Junior, Fender Hot Rod Deville 212 and 412, Vox Valvetronix, Behringer ULTRAROC Gx 110) and it sounds all without any problems. I bought several guitars, but because none had sold SPEED her unique sound.
But it's not a guitar for metal, but rock, blues, pop and funk fit perfectly with this guitar.