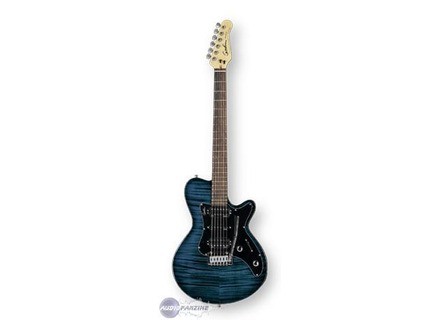 SDxt, Other Shape Guitar from Godin in the SD & SDxt series.

Godin SDxt
5
I am using this guitar with a Fender Blues Junior 3 amp.
I play mainly rock and blues so I use the Bridge or Neck pickups most of the time.

Godin is a brand that I had heard a lot of positive things about. The wood from Canada assembled in America...
The workmanship is excellent on this guitar. Having owned a number of Indonesian made guitars, many of them very good; the neck, frets, fit, and finish on the SDXt are better.
Intonation was excellent. I haven't needed to tweak anything, no neck or pickup adjustments.
The only things I have done with this guitar is a string change(D'Addario 10-46 Nickel Wounds)and a cleaning of the maple fretboard. The maple neck and fretboard are easy for me to play. I have smaller hands so this neck radius works very well for me.

In this price range I really didn't expect much from the stock pickups. I was pleasantly surprised and don't plan on changing them. The Neck humbucker has the sweet, smooth tone I appreciate. The Bridge humbucker has a bark or quack. I did find a downloadable guide from Godin that listed the genres for the various selector switch settings. There is a lot of versatility with the pickup configuration.
That's what I was looking for- a maple neck and fretboard guitar with the HSH pickup configuration.
I have found no cons with this model and Godin has lived up to my expectations with this guitar. And I got a really good deal on it. It also came with a Godin gigbag that was much better than the typical gigbag. This one is heavier duty.

Godin SDxt
5
So I baught this guitar about a month ago now at long and McQuade had to get it specialy ordered in becuase they discontinued the guitar, so in total i paid about 650

MAN WHAT I LIKE........ OK 650 FOR THIS GUITAR IS NUTS IT SHOULD BE 3 4 times the prices oh man. The color combination blue flame black pickguard, has 5 way pick switch, incredible tone, through body stringing, the neck feels like a strat (I love strats) its just an amazing guitar!!!

HAHAH NOTHING ITS PERFECT!

Its it made tough, this guitar can take a beating and still put out!>

Man if you hadn't played a godin i recommened the SdXt (if u can find one) but any godin is pro!
amazing guitars amazing founder... pure amazing

Godin SDxt
5
I bought this guitar new at a local music store for about $500 CAN. I was in the market for a guitar about twice that price but I fell in love with this one.

First thing to catch my eye was the unique body shape. It's kind of a cross between a Les Paul Jr and a Telecaster. A little classy/a little modern. Then there's the finish... a beautiful transparet blue flame maple top. These guitars are made of solid wood and employ real laquer finishes. It's brilliant and glossy. A beautifully fit, hard maple neck, tasetful satin nickel finished hardware. Let's just say it's a good-looking machine. It also came with a very high quality gig bag.

I played it for a while at the store and was sold. I couldn't find any other guitar there that matched it for twice the price. I would have had to spend a lot more to match the quality.

When I got it home I noticed that it was set up perfectly. String height, intonation... all perfect. I'm not sure if this is true of all Godin guitars but I appreciated it.


It has a floating tremolo bridge. I HATE those things. HATE them. I love the guitar regardless but tuning with those things is an exercise in patience. I would like to put a fixed bridge on this thing. Also after a few months the tone pot got a little scratchy. The volume and tone control is a little harsh. I'd prefer bit smother roll-off.

Awesome! Fit and finish is beautiful. A mirror lacquer finish. The fit of the neck in the pocket is so tight. Very good!

I'm very impressed with this guitars build qulity and sound. The pickups are decent, the humbuckers are pretty hot and bighting. The single coil is sufficently clean and glassy.
If it were stolen... I would certainly replace it with another. And I will definately be checking out other models in the Godin lineup.

Godin SDxt
5
I paid $1100 Austalian for this guitar (the Aussie dollar, at the time of writing, is somewhere around 65c to $US1, I think. I don't pay much attention to high finance and exchange rates and stuff). I got it at a local music store where the owner let me plug in and play away, and then couldn't resist the urge to show me what the thing was really capable of. And it is capable of a hell of alot!

I should point out that this is my first "real" guitar - for a year or so i've been using my brother's old Squier Strat. The difference is so noticable, it is almost orgasmic!

I Like everything about this guitar! Nice low action with no buzz at all. The two humbuckers really pack a punch, and the single coil in the centre provides some fine, clean Strat-like sounds. In fact, I call this thing a "Fender Les Paul" or a "Gibson Stratocaster" - it can do anything either of these far more expensive guitars can do.

I'd of liked a different colour - a purple / burgandy finish would have been sweet. As it is though, the sunburst looks damn good - every non-playing female i've showed it to has told me how "pretty" or "niiiice" it looks. So there ya go - it ain't all just about sound boys!

From a sonic point of view, the tone control and pickup switch make a really noticable difference to the sound, unlike some other guitars I have played. I only own a 15-watt amp, and even through that it sounds beautiful. When I plugged into a mate's Fender DeVille - WOW!!! I mean, WOW!!! Especially on the bridge humbuckers. Like I was saying... WOW!!!

Haven't owned it long, but it sure seems sturdy. It has a reassuringly heavy feel - not so heavy that I feel like i'll drop the thing, but I know that if I do, it'll stay in one piece.

Brilliant! If you don't already own a real Strat or Les Paul, get one of these and kill two birds with the one stone. And save a whole bunch of money, too.

This review was originally published on http://www.musicgearreview.com
Did you find this review helpful?yesno
»
Read the 8 user reviews on the Godin SDxt »

Other Godin other Shape Guitars