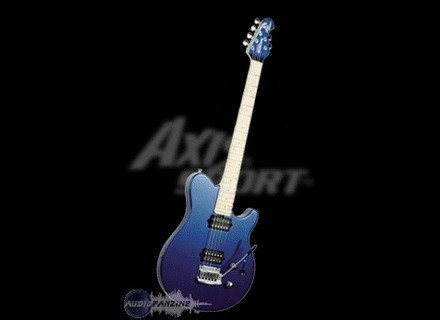 Very pleased all around. the guitar has a beautiful finish, excellent construction, and awesome tone. I was particularly happy with the neck. I have the maple fret board option which makes for great feel and tone. This guitar is great for bending, and blues styles riffs. I have the P-90 pickup option as well, which gives a great tele on steroids sort of tone. very raw sounding!

I don't like the battery plate on the back of the guitar. The P-90 pickup guitars from Music Man have a noise reducing circuit and there is a 9 volt that powers it. The back of this guitar looks so good, it is a bit of a shame to see a battery cover back there.

Really well made. Beyond that, I found that Ernie Ball (company that makes music man) was very helpfull with my custom order. they gave me updates on my guitar when I called and even allowed me to make special requests.

If you don't have one, get one! This is the way a Tele should be. Hand made in San Luis Obispo, CA by quality craftsmen. Unlike Fender, that simply rides on thier name, this company puts out the goods!

lagrelle's review (This content has been automatically translated from French)

The guitar is trslgre it pse just over 3 pounds, a real lightweight, while its small size makes it an instrument for the petite framed IDAL. Question comfort is excellent and even if there is no groove for the forearm, the grip is good and trs you feel immediately comfortable.
Ds Premire notes, one is struck by the incredible ease of the handle. It is round, super ergonomic, it's all simple plans that did not happen on other guitars go on it, play with ease dconcertante. Trs important point: if the sleeves are exceptional music man, they have very specific profiles. I tried a dj with Luke unmanche V, a surprise to beginners. The handle is round but assymtrique, though curled up, and thinner towards the treble.
The rest is also good trs, the change of micro ais is the knobs are situs and do not crachotent.
Until the short is worth a 10 except when the vibrato is not the same height from the rest, and will not be limited that some sporadic use (Floyd freaks refrain) under penalty of disagreement guitar, even if the mcaniques are blocking. In addition to the vibrato is that "pitch down", we can not pull up, it's not Gnant in itself, but a more restricted use.

A vacuum of an Axis possde rsonnance and impressive clarity, we feel that the quality is good and with the microphone is close to perfection.
The sounds cover a wide range, this guitar is super versatile, everything goes perfectly both the violin and the pickups are excellent. This guitar is meant (according to the positions of slecteur) a stratum shuffled, and Les Paul Tl. Both say now we do not find the grain of these guitars, but are close and rsultats covaicants.
Specially mention the Tone knob of trs effective in suppressing acute and really plays a rle in getting the sound.
In short, in a word, sounds trs trs versatile and beautiful.

But I must admit that this is the best of me scratch that given t test, and yet I have tried many dj: Jackson made in Japan, Lag Rockline, ESP MII, Vigier Excalibur, Gibson Les Paul.

If I had the other one I comprare possde, it would be the Excalibur, which shares with the Axis more common: a violin gniale, a fantastic race, a concept of "Super Start" trs successful, a range of sound quality and wide trs.

Still, the Axis Sport (in frne) is less common to find that his two sisters and Axis Axis Super Sport (basswood), and fairly priced RSDLP consquent (> 2000). Nanmoins of OCCAZ 'is found less than 1000, and is an excellent compromise!

Music Man Axis Sport
5
The Axis Sport is a derivative of the Music Man Van Halen, also manufactured in California, but with different woods (swamp ash or ash according to sources, but given the weight it would rather swamp ash = ash swamps, timber ri telecaster of 52), and a different acastillage: fixed bridge and vintage vibrato instead of the floyd, mechanical self-locking, a tone and more volume and a 5-way switching (cons 3 on the Axis EVH).

The pickups were unchanged cons, di Marzio custom, but they are really showcased in this model (due to a split position and sounds provided by other easels that floyd). And far be clear: no question of changing the pickups.

The neck is exactly the same as the axis, plus the opportunity to have a rosewood fingerboard. This model had a relatively short lifespan (about 6 years)

Correction: after several trials and purchases, there is a slight difference in question handle. The "maple keys" vary somewhat, but the "Rosewood" away a little of the original while maple. The profile is still unbalanced, but lacks the roundness (too thick or not enough, but rarely identical). It will seem insignificant to most, clearer for those who have their habits on the keys of this model maples.

This is the most comfortable handle on the market for my taste, but as with all music man, it is narrower than average. It will therefore be necessary for small hands. Nevertheless, the national average (1m75), with hands not particularly sensitive, I feel perfectly at ease, for plans blues (neck asymmetric but rather round) as plans for more technical. But overall it&#39;s a handle blues, rock and more. The neck width (41mm at nut), if it promotes the soloists, will require a little getting used to own broken chords. The jazzman should not love.

The guitar is light, well balanced (tends to be horizontal, so for fans of slash ... sorry!), Controls well placed and the access to the truss rods (short in the body) will allow you to settings less tedious (no disassembly of strings each).

Question acastillage, good quality, however, that the lottery with a little vibrato (as for luke ago). One of my orange axis is not great, I have tightened, which would also provide an extra ordinary sound (admittedly a little rough) much better than fixed bridge base (not worth the hardtails the blow in my opinion). One of my blue is no less extraordinary: I can give Klitschko a large number of dive bombing tremolo or Dante to Blackmore, AC is given (you can check on my myspace videos) as well as a floyd! If you think I&#39;m exaggerating, take a look at the videos from my space: http://www.myspace.com/letaz59

The axis is a sport EVH ultra versatile in its configuration of pickups, controls, and bridge.

Versatility does not mean less character. It is a rock guitar that allows to move from country to blues, blues rock, rock to hard rock (obviously sounds van haleniens are too), and can also do jazz. She has an incredible presence in the mix, and she managed to achieve unanimity among my friends (not fundamentalist, but almost) blues, jazz and rock musician shredder. I NEVER use it for recording solos and primarily rhythmic.

As this guitar is very balanced and sensitive to the nuances, you can plug directly into the amp and alternate solos and rhythmic gadgets. At the Van Halen what.

IMPORTANT ADVICE FOR THE SOUND:
-The factory setting of a sport axis allows a palette of its very varied, like a super-strat. However, you can still adjust the sound so very marked, enhancing mics and shaking vibrato. I did on my first model (maple fingerboard), and I can compare more easily now that I am with a second copy (default setting). The guitar takes on its character, but beware, some amps or pedals (distortion and fuzz) does not cash in saturated (peavey classic, fender, marshall jtm, and even my rivera!) He will have a channel sat very balanced, not fuzzy. Basically, I made this setting to "wake up" my Marshall JCM800. The sound is much more sustained than with a hard-tail (I had also ...). Nevertheless, it remains very volatile, but the compromise between fender and gibson is optimum. My second is the standard setting, to have something "softer" kind super stratum, and with rosewood fingerboard, it&#39;s pretty efficace.b]

I have owned about thirty electrical (a dozen fender, gibson of, prs standard 22, Music Man Luke II, Shecter USA, etc.). In today my arsenal consists of 4 electrical: one the paul standard and ... I stopped on 5 axis (3 sports, 1 Super Sport Piezo, 1 olp floyd amended).

For each concert, each plan, I am systematically axis sport, I use my "number one" for 5 years (already refrettage the meter is telling you). Do I really said that I wish I could redo this choice without hesitation? In fact I watch any sport axis (if you&#39;re a seller ...). So, to relieve my beautiful and varied pleasures I have acquired 2 more sport axis, rosewood fingerboard (see my photos page, just missing my sunburst)

This model is rare opportunity, since he had little success (less than the super sports anyway). Know that early career, this guitar was sold approximately 11,000 F (so about 1650 euro rate observed in 1998: https://www.judge-fredd.fr/spip.php?article239 )
Personally, I paid mine (January 2001) 1450 euro. Knowing that she was no longer sold after 2002, the price has been lowered.
In short, this model is not collectible, and less than a Fender Start asked the same range, the bargain price is usually below 1000 euros (or even well below the U.S.)

PS: I&#39;m not EBMM HTD endorsers or otherwise, I "roll" with current models in this case. Consider me as free and honest.