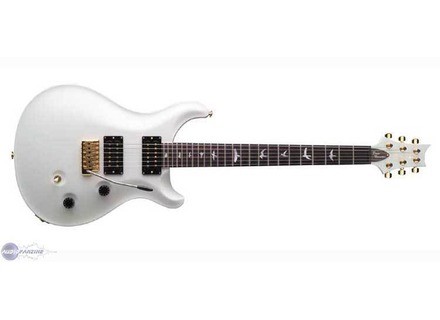 PRS Dave Navarro Model
4
Dave Navarro is the guitar player for Janes Addiction. A few years ago he was getting kind of famous but you hardly see him any more. This is his signature PRS guitar. It is not much different than most other PRS guitars other than the finish. You get a very white finish, whiter than most finishes. This matched with gold hardware gives the guitar a classy look. Not many guitars come white with gold anymore. The rest of the guitar is pretty normal for a PRS. The body is mahogany with a maple top. The set neck is mahogany with a rosewood fretboard. The neck profile is the wide thin profile or what they call Pattern thin nowadays. Up top you get the fancy PRS locking tuners which look futuristic. The bridge is the PRS Fender style tremolo that works really well. The pickups are 2 PRS pickups and the controls depend on what model you have. They all have master volumes and master tones. Some older models have rotary pickup selectors the later ones have a toggle like pictured here. No one likes the rotary pickup selectors that PRS use to use.

PRS guitars are great playing guitars. This example is no different. The Wide Thin neck has a nice feel to it. It reminds me of a 60s Gibson but with a wider and flatter radius on the fretboard. This example had the toggle switch which I prefer to the rotary switch. With the rotary switch it is kind of hard to adjust on the fly switching from pickup to pickup. I do not like how the pickup selector is way out by itself. I would prefer it to be closer with the rest of the controls. The tremolo is a very stable unit and holds tuning very well with the locking tuners. The PRS locking tuners are some of the most advanced tuners on the market. They prevent all forms of slip by locking on to the strings as well as locking the tuner in place.

This particular example I was testing had a set of Seymour Duncans installed. It had a Custom Custom in the bridge and a Jazz in the neck. This gave it a more specialized hard rock and metal sound. The PRS pickups are quite versatile and work well in many areas but if you are going to do one area specifically you might as well get pickups designed for that area. The Custom in the bridge has a tight sound but it is not super metal tight. It is tighter than the JB which is what I think the owner was going for. It works great for metal and harder rock. The extra tightness lets you run a bit more gain without the sound becoming too boomy. The Jazz in the neck is a classic neck pickup. It is similar to the 59 but has a bit more bite for clarity. Both of the pickups clean up well if you ride the volume a bit.

If you want a white PRS this is it. If you just want a PRS 24 Custom then there are plenty more to choose from. I think they should sell this guitar cheaper than the other models since it has a plain top. But since its a sig they wont. I think PRS has some of the best looking tops on the market so personally I wouldnt bother with a plain top PRS, but im sure Dave Navarro has some fans or else he wouldnt be famous. There is a new Dave Navarro PRS SE model out now and I am hoping I can review that to see what the import version is like. That will be priced so that more people can afford it.
Did you find this review helpful?yesno
»

PRS Dave Navarro Model
3
Sometimes I questioned some of these amplifier builders and guitar builders on why they decide to produce and manufacture a signature guitar or amplifier from someone no one gives a rip about. This Paul Reed Smith guitar is a signature Dave Navarro model guitar. I mean really who wants to sound like Dave Navarro? I mean he doesn't really have a distinct tone or any music that people really care to listen to you. He spent some time in Jane's addiction and a little bit of time with red hot chili peppers but other than that no one really gives it rip about his tone and his guitar or the way his amplifier sounds.

This is basically a 24 fret PRS guitar. Is nothing special about this and overall it's just any like any other Paul Reed Smith guitar that has 24 frets. It has to humbucker pickups with a volume control knob and tone control knob and that's pretty much about it.


This guitar sounds exactly like any other Paul Reed Smith guitar. It sounds good and the tone is there like any other model. It looks pretty cool but to have Dave Navarro's signature on it somewhere or on your paperwork or guitar cases is just beyond me. I can't imagine anyone desiring to look or sound like this guy because was he really done as far as anything in the music industry. Whatever that's my beef with this guy he's kind of annoying and I would never buy a guitar that had his name on it.

dfunk's review (This content has been automatically translated from French)

PRS Dave Navarro Model
5
United States 24 frets hfs in bridge and neck in vintage bass tremolo, mechanical and extremely accurate even with a game in Acharn vibrato remains in agreements, it is rare for the asser said this guitar .... seems to have no dfaults, violin perfect rgonomique and lightweight.

Trs versatile by playing on the pitch and volume of the microphones and with a good amp lamps (orange Rockerverb) is exellent, trs complmentaire my gibson
split on micro offers versatility rel ....

I bought it new qqs months ago and ergonomics and versatility, playability and sound are a high end guitar, I want a accrir santana2, so I am considering the resale of this one because the price is terribly CHRE santana 2.
Did you find this review helpful?yesno
»

The principle of the PRS is to be between the rock / funk rock and metal. However it is not the best in one field or another, the sound is less warm than a les paul but more precise, less accurate than ESP, but warmer ...
It is made to move from one musical style to another, keeping all the time sounds very correct.
The split works well enough microphones, the sound is at once more subtle and less round, so it's not a gimmick.
I played on a Mesa Quad preamp = Samson studio amp = 2 * 12 Cabinet Sovtek.

I do not know if it is obvious from the pictures, but this guitar is really super nice. My entourage over there is unanimous so I think this is not a subjective opinion.
She is also super expensive: I have to hit at 1400 € OCCAZ and I think it's a fair price, but I can not see any justification to put € 3000 new (perhaps my ear is not sensitive enough ...).
I have a Cort is an imitation of the PRS Santana, well I found that there was no difference in mass of clean / crunch. Once we move into lead on the other hand no photo PRS has a sound much more defined, more punchy, etc. ...
But Ibanez to 700 € will be much more comfortable on very precise metal ryhtmiques example.
So to summarize, if you want to have fun on a single guitar will be comfortable playing a bit of everything, it's a good buy. In addition you can hang on the wall is the class so she's beautiful

on the other hand, if you are very demanding in a particular style, perhaps you'd better look to more specialized guitars.
Guitar