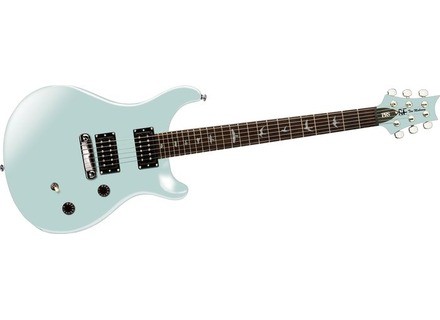 SE Tim Mahoney, Other Shape Guitar from PRS in the SE Signature series.

PRS SE Tim Mahoney
4
Paul Reed Smith guitars are very exotic guitars and handle really well balanced tone throughout the instrument. These are guitars that really work well and pretty much any musical setting me put them in. I've seen these guitars play in country music all the way up into drop tuning heavy-metal sounds. There's very versatile and almost take on whatever aggression or dynamics you give them. They're almost like a chameleon type guitar because they take on whatever setting rig that you give them. The thing that confuses me is that the dude from 311 gets his own custom shop guitar. Who wants to sound like 311?


PRS guitars have a nice warm woody tone primarily because they're mahogany based woods. The use mahogany in the body and in the neck of most of their guitars . They generally use a rosewood fretboard and then a maple laminate top on the body. This doesn't have the top but is still well balanced. You get a nice thick woody tone but you also get nice solid clean tone as well. These are very versatile instruments and they have a nice full body tones very similar to a Gibson Les Paul guitar. So if you have ever played a Les Paul guitar than you'd probably be in a comfortable group with using one of these guitars.


Many of these Paul Reed Smith guitars can very price and they're almost not clear on the pricing structure within their model lines. I have seen the same kind of guitar or the least the same looking guitar priced at $600 and then priced at $8000. I know that the different woods and builds will have a different value but it's confusing to understand the actual pricing points when you simply look at one these guitars . So I suggest doing your research on the Paul Reed Smith guitars because you can come off a little bit confusing when you see one that looks like a inexpensive guitar but price route $600 and then you see one that looks exactly like that priced at $5000. So I suggest simply doing your research before purchasing a call reach me at guitar.
Did you find this review helpful?yesno
»