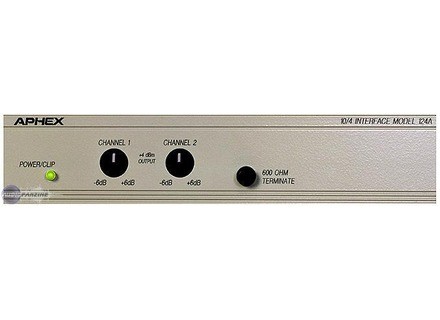 124A Two Channel Level Interface, Other Studio Effect from Aphex.

Aphex 124A Two Channel Level Interface
4
The Aphex Systems 124A is an audio level interface that is designed for high end audio gear. It can be used for a variety of purposes, both in the recording studio and for broadcast purposes. Essentially it's designed to create a balanced connection for things that might not be balanced or leveled to begin with. It's an analog piece of gear that has connections in the form of both RCA and XLR and for both inputs and outputs. It isn't rack mountable as it comes in it's own sort of box.

You don't need to know much in order to use the Aphex Systems 124A. Basically, if you know that you need it, you're good to go. All you have to do is set up and make your connections, and then set your levels for each of the two channels with the gain knobs on the front panel. Since there isn't much to using it, a manual most likely isn't necessary.

It's hard to say much about the sound quality of the Aphex Systems 124A considering the situation that I've used it in. I've used it basically as a leveling impedance converter in a professional studio for use with a small set of Apple computer speakers. The speakers were old school Apple M6082, which are computer speakers that have been utilized by audio engineers to check mixes on in the recording studio. All I can say is that the 124A gets the job done for using these in this sort of environment. Beyond this, I'm not sure how well it works since this is the only situation I've used it in to date.

Beyond what I've used it for, the Aphex Systems 124A can offer up a lot of different uses in the pro audio world. I don't have much background information on it however, since I only recently used it for the first time and used it in the previously mentioned limited sort of scenario. Having said this, if you need them to level out your signal on an unbalanced connections like computer speakers, it will most certainly get the job done...
Did you find this review helpful?yesno
»

Other Aphex other Studio Effects