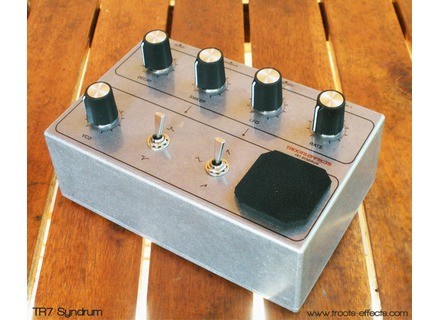 ink's review (This content has been automatically translated from French)

Troots-Effects TR7 Syndrum
5
Syndrum the TR7 is a module of analog electronic percussions inspired Synare with some knobs to adjust the sound and a small foam pad to play. (can connect a pad / trigger external)
Decay, tune, sweep, sine or sawtooth LFO for modulating the sound and create sounds perceived or electro sirens and effects.

Using extremely simple, you move the knobs, we finally find the sound you want and it is done live by modulating ...

I used to reggae / dub. I love this module which reminds me of the sounds of Sly Dunbar example. I used the resonance of the filter (moog type) of an analog synth before giving a close enough result, but I'd rather have a dedicated module.

Essential in a set reggae / dub and disco 70's (Ring my bell!). In addition it is hand made by an enthusiast.

fredread's review (This content has been automatically translated from French)" excellent"

Very easy to use
Manually editing in real time sounds

I use it since its inception, no problems. Note that the designer operates 2 years sav however.
I would do this choice without worry.
Good value for money, cheaper than the original SYNARES become rare ...
Directed by a passionate, 100% analog and made in France!

Published on 02/17/14
Created in 2008 by Tooney Roots, the little french company offers gear for Dub and Reggae producers as well as for DJs.