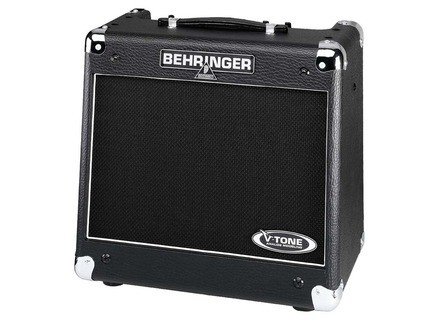 Behringer V-Tone GM110
5
I bought the Amp at a local music store for $114. A good friend had one and said it was a nice amp.

Nice tones are available. It has the Behringer modeling tone setup: 3-amp(tweed, british & California), 3-gain(clean, overdrive & hot), 3-speaker(flat, 4-12 & 2-12). There is a gain control for input, a master volume and well-done three-pot tone control. Changes in instrument volume cause tube-like changes in amp tone and volume. The "Dynamizer" modeling is very nice. 30 watts are handy for practice, recording and some country gigs. You can mike it or send a signal to a PA for bigger gigs. I like the back of the unit; It has headphone out, external speaker out, preamp out and return. It is simple, light-weight and convenient. The price is nice. I've played and owned Marshall, Peavey and Fender amps. The Behringer Vintager 110 can sound believably like a tube amp at even low volume. I like it and would buy it again.

What's not to like? However, it would be nice if Behringer made a 50 watt 1X12 with a clean-hot footswitch.

Great tones,low price, great value, reliable, light weight and convenient.
You can get about any sound you want with a Tele, Strat, SG or Les Paul. It's a good little amp.

Well, I must admit, and this is why I chose it, that it sounds great for the price. I do not really use heavy distorted sounds, and for my purpose, the sound seemed quite good, really "warm".

The first doubt came, when I had had it at home for a while and noticed that the clean sound did not really seem clean. Especially when playing up the neck on the non-wound string I would feel the sound "crumbles" somehow, was not smooth as on other amps.
Now I do not compare it to tube amps but rather average solid state amps. Seemed as starting limitation of the signal or some other frequency mixing in it.
Well, anyway, when playing with others, you cannot hear it, so I decided that was OK, the amp was cheap anyway.

The problem was, that when I played with others, I could not hear ANYTHING. 30 watts is, let's say, a euphemism. Say 15, yeah?
Well, to amplify an amplifier to be able to rehearse is quite frustrating.
On the top of it, when strumming harder, I suddenly heard bumps. I first thought there was something wrong with the jack but finally I realized it was the combo.
The service said that I was not supposed to use the maximum of the scale (!). (Why, I wonder, is the scale there, then?)
Anyway, they said that Mr Uli Behringers' engineers underestimated the cooling, and that they would add a vent for free, and then it would be OK. It was OK. For two weeks. The service decided to alter the circuity in order to prevent some parts from burning out. Then it was OK. For three weeks. (Now, I do not play any "powerstation" my guitar is a passive SC strat.)
Presently, as I was able to use the amp for 50% of the time I had it (which doubles its price, yeah?) I want my money back.
My wife told me : "No more cheap amps!" Well, at least something positive.

Yeah, and the handle fell off in 4 weeks from purchase...

Except for the handle, which is not that important, and for the circuity, which is the most important thing, I'd say it is great. Looks really nice, has symetrical output, effect loop, easy to transport.

Well, if you are short of money, and you

1)want something that sounds good

3)are not going to use higher volumes

Behringer V-Tone GM110
5
I got this off eBay for $95, including a 20 foot cord. I have NO idea how I heard about Behringer, but my friend told me if you want to play in a band, you should get a 30 watt amp, and I got one.

For $95, this thing is EXCELLENT. $95 for a 30 watt amp? What the hell is wrong with Behringer?
The amp simulations (California = Mesa Boogie, Brittish = Marshall, Tweed = Fender) sound great, especially for a $95 (or $99 from musiciansfriend.com). I still cant decide which setting I like better: Calif or Brit. Both sound great.
There are also 3 modes, Clean, Hi Gain and Hot. I don't really use the Hi Gain setting because Hot sounds a lot better. I usually keep it on clean though.
There are 3 speaker simulations, US, UK and Flat. meh.

Yes, it's 30 watts. 10' Jensen speaker, Gain control, 3 band EQ (Low/Bass, Mid, High) and volume (level).
This amp CAN be used with pedals (I dont know why some people said it couldnt). What more can you ask for from a $99 amp??
oh yeah, a headphone input, D.I. Out for recording and some other stuff. Check the manual at the behringer website.

So far, there havent been any problems. I have heard Behringer equipment is extremely reliable, and other people saying their amp broke down in 3 years.
Well, my amp survived a flight from the U.S. to here (Canada) in 2 thin boxes with NO padding. I think the amp should outlast me.
As for quality, you have nothing to worry about.

This is a great beginner amp. It's good for practicing and recording, jamming with friends and pissing off neighbours and your family. I put this on full volume, and DAMN it was loud. SERIOUSLY, do NOT play it on full volume without ear plugs. lol. Some people say this amp would be worth at least $100 more if it could be used with pedals. HAH. Its $99 and it CAN be used with pedals. Check the Behringer website for all the features and everything. Theres a 10 or 11 page manual at the website.
Buy it, it's a great amp.

Behringer V-Tone GM110
5
I bought this sweet little combo through Musician Friend's website for the mere price of $99. I was amazed at the deal, and it only took 5 days to get to me, even though it had been backordered.

This amp is the sweetest amp in its price range, even compared to a lot of amps above its price range. It comes w/ three amp models (Fender-like, Marshall-like, and Mesa/Boogie-Like, circuits), three gain-modes (Clean, Hot, and High-Gain) and comes w/ three cabinent simulations (Flat, Twin, and Half-Stack). This is more tonal versatility than I've ever seen in an amp. Has great tube-like sustain, and never buckles when cranked up. Unit comes with 10" Jensen speaker, 30 watts RMS power, and FX Send/return for adding effects. A balanced XLR out w/ ground lift allows for easy, no-noise recording w/ full amp sound (Simulations and all).

If you're on a budget or wanna save some cash, and you need a great practice/warm-up/rehersal/recording amp - then BUY THIS! So much tone, so many features, and it's light enough to take it wherever you need it.

This review was originally published on http://www.musicgearreview.com
Did you find this review helpful?yesno
»
Read the 6 user reviews on the Behringer V-Tone GM110 »