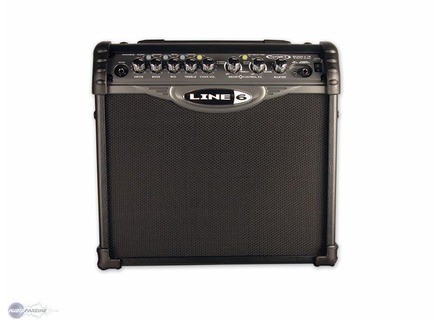 Line 6 Spider II 15
4
This amp is 15 watts but it seems as if its more, there is a lot to this amp that most people don’t appreciate but you would have to listen to it in person to really get the sound and feel of it. I am a fan of it after just jamming on it for 30 mins. I love the chorus and reverb on it, very clean.

It's pretty easy to dial up some decent tones through this amp. I don't think I ever had to crack open the manual. But, there is one major flaw to this amp: when switching between channels there is a long delay. Perhaps this is the "analog circuitry" taking its time, but whatever the reason it renders the amplifier unusable for switching between channels in the middle of the song. I'm pretty good with timing, but I could never get it down for punching in additional gain (from the other channel) for guitar solos. That being said, if someone didn't do a lot of channel changing, I guess this would be a decent amplifier, or it would have to be used and miked only in a studio environment where quick switching isn't necessary.

This amp is no longer being made though, it has been replaced with a newer model. I havent had a chance to get my hands on the new model yet. I will soon though, sure you wont need a manual for that one either. Very easy to start using it.

This is a decent sounding amp, even though it's a Behringer. I had one problem with the input connection falling apart, probably due to its cheap manufacture. For a high school kid, it might be a good first amp for playing with friends, considering the low cost. But, as mentioned about, the delay in switching channels really hinders the users ability to play with this amp.

Line 6 Spider II 15
2
This little amp is nice priced and convenient amp. Much like the 75 watts it retains most of the features from the original amp modeling amps that line 6 starting making years ago. Now they have updated it to the modern times and it sounds not have bad. The tones of this amp I like a little better than the original Spider amps that I was previously used too. Line 6 has upped their tones in these new amp models with better tonal response.

I have always had a problem with amp modeling since they don't sound anything like a real amp. Don't get me wrong this unit will not sound like a real amp. But ti will get you in the ballpark of how they should sound. This amp is not designer to rival real tube amps but give a learner or beginner a great start at learning the electric guitar.

This amp is not longer in production and has been updated in a newer model. You can find it on the used market for under $99. This amp is marketed a the beginning guitar player who needs an amp with a load of effects and options. I wouldn't recommend this to anyone trying to start a band or responding to a craiglist ad looking for a guitar player with a lot of sounds. So for the learner player this would be fine.
Did you find this review helpful?yesno
»

mikaka75's review (This content has been automatically translated from French)" The worst DAUBE the world!"

Not for the music, no music.

The clean is hilarious because it is so soft and artificial.
I do not even dare to mention other sounds.

I must have 2-3 years of scratching when I bought it.

It rots now in my basement and I'd be too ashamed to sell.
The crazier is that the stuff seems to stick out: moisture, bleach, crowbar, Taiser, nothing happens, it continues to make noise when you use it.

If it again, I'd go running.

If you want to get into comedy, this amp could make your case.

Easy adjustment, since the number of selectors (5 for sound, two effects)
Manuel fairly clear and available online in pdf format.
-Easily change between "Clean", "Crunch", "Metal" and "INSANE !!!!" (Just a click of a button).

This amp is all that is simpler in terms of use.

- Playing a lot of metal this amp suits me perfectly including the type "Insane" with a huge distortion!
-The sound is very correct with respect to distortion, (Metal, Insane ...) however, his "Clean" is disappointing compared to a fender, a little soulless ... and I find that the toothless Crunch (paradox? lol) but it is very versatile.

I use it for 6 months and I'm still satisfied even if Marshall might have been the welcome for a comparable price. For the sake of brevity I will say that this amp is a little amp versatile enough, but is best suited for fans of Metal or another, but for those who are interested only in sounds clear, they can find better now! (Fender. ..)
The value for money remains honest.
If I had the opportunity to buy an amp I'll stay on my little Line 6 because I think it is for a first amp, very convenient (I play in my room ...).
Did you find this review helpful?yesno
»
Read the 15 user reviews on the Line 6 Spider II 15 »