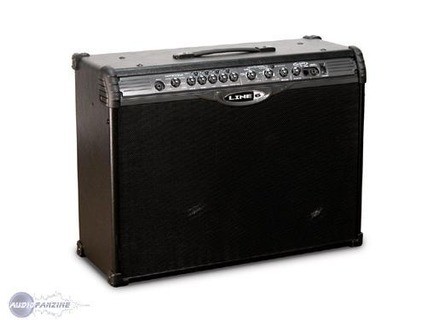 Line 6 Spider II 212
5
Well, Im not actually a "real" guitarist, Im actually a Jazz Drummer and have been for the last 9 Years. Ive played in several bands and orchestras, and my last endevour I toured Ireland in the schools Swing Band playing drums (im 19)

In the last 2 or 3 years I have tried to put time aside for learning to play the guitar and bass, and more recently the harmonica! (very cool and quick to learn instrument, cheap too!)

Anyway, Im a bit of a collecter when it comes to anything music, anything old and cool intrests me, as well as new and modern.

Well, I managed to snap this baby up for 125 GBP off an online auction, and collecting the amp wasnt a problem, about 60 miles away and back, which is quite a fair way, but its no hassle when I wouldnt risk having it sent by delivery!

Oh, this amp is absoutly incredible. I dont know why I even bothered with the basic marshall when I could have bought one of these babys a long time ago.

Each amp setting, the twelve amp models its based on, from the humble ac30 to a mesa boogie!, its got them all. Although I mainly play blues and rock, this amp doe the job nicely.

Because the amp is so DIGITAL, it feels almost too perfect, theres no inacurasys in the sound, and theres lots of little quirks I love about it. For example, you can put it too a high gain amp like a mesa, and turn up the master to 1, and you can get some lovley little pinched harmonics squeeling, and I play an ordinary generic telecaster replica!.

I also love the fact you can save the volume and EQ settings AS WELL as effects on four sperate channels which can be selected by hand, or simply by using a plug in foot pedal lke the FB2 (which came with my amp)

The effects themselves are pretty nifty, I love the idea that the further you turn the knob on the effect,m the proresivly deeper / faster it gets, and also there is a tap tempo button for setting the delays. There is tremelo, chorus, phaser, flanger, tape echo, delay, and sweep delay (a bit like tape echo with a touch of flanger). Although the ability to edit these effects is fairly limited, who cares?, and BE HONEST, how often do we use effects other then wah wah and reverb, hmmm?

Speaking of reverb, the reverb on this amp is pretty amazing, and sounds very organic and rich, not tinny and fake.

OK, there are several things that frustrate me ever so slightly about the amp, and Ill be very honest with you about this.

If you intend to go about flciking through the amp models with the mster more then 4 or 5, you might risk damaging youre ears as the gain gets progressivly louder, for example, if the gain turned right up on a ac-30 sounds fairly crunchy with the channel volume half way, imagine what the mesa-boogie sounds like!, YES, ALOT of loud squeeling and feedback. Because the amp memorises the gain settings, its dosent changer for another amp, and boosts it too the equivlent if the gain knob was turned that far on the amp it was being moddled on. My advice is suss out what amps you want and effects, and save them on each channel, other then that, turn youre volume down on youre guitar before you go delving in and all is ok

The effects limitations might piss some people off, but they are there to be subtle like chorus and some mild delay. If you like Pink Floyd / Dave Gilmour, then you will LOVE this amp.

The other thing I dont like about this amp is the very last amp on the dial "Insane", it sounds like a frog farting.

The EQ settings can seem very subtle at times.

The only other thing I dont like about this amp, and some of the people have purchased it, is the ammount that they bitch about how cruddy it is. It isnt cruddy!!, if you want cruddy, but a marshall AVT (no offense AVT owners, but the amp has its arse kicked from every angle from the line 6)

The reason why I like this amp so much is the cheapness of it, its cheap!, and more importantly it does everything it says on the tin.

My rant is over haha

The construction of this amp is absoltuly lovley, everything says "quality" about it, the dials and buttons feel a tiny bit plasticy, but very smmooth and controlled and chunky.

The asthetics are amazingly pleasing to the eye, but its certainly built for the road.

im going to give this amp a 9.5 / 10 purley because I think there a .5 in improvemrnt to be made, but its one hell of a good amp for the money and if youre not an amp connosuir moaning about the lack of valves or "Tubes", then this one is for you.

I like its 12 amp models and its 7 effects.It is 75 watts and seems to get me into to trouble with the police evey time I vave the volume up at 6 . The built in tuner comes handy when changing tuning modes at gigs.

It should have an included footswitch . It is a bit heavy but it does have alot of built in features.

Itis very well made and seems that'll last me many years.


It's got 7 effects,6 Amp models it made me sound 10 times better than on my Roland Cube,I really like the celestion speaker.This amp ain't thjat big but it can crank up some hugh sounds

Line 6 Spider II 212
5
I bought the Line 6 from Electrohill in North London for £299.95. I needed a good amp, with a good metal distortion, decent clean effects, and fair range of other effects. Something loud enough for gigs, but something small enough to practice.

It has an awesome metal sound (like Metallica) "Insane Green", which you can adjust the bass, drive, reverb, treble and mid, for your desired sound. It also has the more lighter metal sound, "Metal Green" like AC/DC, and the more rock 'n'roll stuff. The clean channels are beautiful with new strings, where it sounds great with the "Chorus/Flange" and a bit of reverb. Its awesomely loud, and it came with a 2 channel footswitch.

The footswitch lead sort of shrivels, and stiffens up after you've coiled it up a couple times. Its a bit like a telephone cable, as the plastic inserts, clips into the amp and footswitch. This amp is a bit too heavy as well. The sound isn't quite perfect, I use a Epiphone Les Paul Standard, where the pick-ups aren't strong enough. I've played the affordable Peavey Wolfgang through it, and its a lot stronger, with more low-end. So you definatly need a decent humbucker guitar to get a good sound out of it. Not suitable for strat players.

Solid as a rock, very well built. Almost perfect, as it doesn't have the stiffer netting like some amps have. It looks awesome as well, the greyish silver on controls board and the silver knobs gives it a modern look.

Theres not many other combo amps, that contain the decent quality of the construction and sound that the Line 6 Spider II delivers at an affordable price. If you want a decent amp for small gigs and for practice, get the 212 or the 210. But if you want a decent amp just for practice, then you can't go wrong with the 112. I do suggest you get a decent guitar with decent humbucker pickups.

This review was originally published on http://www.musicgearreview.com
Did you find this review helpful?yesno
»
Read the 26 user reviews on the Line 6 Spider II 212 »