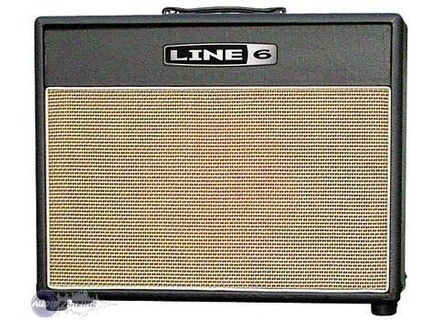 I have played almost every type of unit that has come out by Line 6 and i always like their stompbox effects and there PODs for effects purposes but their amp modeling is just terrible. It is unnatural and just purely processed sounds. You cannot make a digital preset sound like a Bogner XTC or Mesa Boogie Dual Rectifier. No amount of processing power can recreate those tones. It simply cannot be done.

Amp Models Based On*

Cab Models Based On*

This amp is one that has the power and versatility of the POD series units but in an amp form. You get basically all that the POD has but you can blast it through their speaker combo.

The only amp models that I like in this batch are the Soldano, Bogner, and Vox amps. The other ones sound thinner and metallic sounding. The vox amps can take effects well and so the tone is a little bit more tolerated. The Soldano and Bogner have so much gain that is kind of masks that you are playing a digital amp. You can't dial the processing out of it but this is a little bit more audibly pleasing. And of course the Mesa Boogies are thicker sounding but still thin in comparison to a real Dual or Triple Rectifier.

These amps have been discontinued and replaced by the Bogner series I believe or maybe the spider. Either way you have to go the used market route to get this amp. If you must own a modeling amp then I would looking into the PEavey series amps. They model their own amps and they sounds decent for digital. If you want all the different amp makers in one then this is the amp for that.
Did you find this review helpful?yesno
»

Line 6 Flextone III
3
This solid state guitar modeling amp is a nice combo that packs a lot of features into one package. There is the standard instrument cable 1/4&quot; input. There are an insane amount of effects on this amp, and they can all be controlled by programming combinations into the amp itself. It's impressive how many possibilities there are.

To get started with this amp is pretty simple. Plugging in and playing is the way to go. Gigging is a little trickier if you want to be able to switch to other effects. You have to program the custom settings onto the amp so that you can use the switch. There's a limit to how many you can use through the switch though, so trying a new effect on every song is a pretty daunting task. However, since that's not really a major problem for most players, it shouldn't be an issue. Getting a good sound is a relative term; some people like digital amps, some don't (I personally don't prefer them over tube amps). However, if it's your thing, it's not hard to get a good sound. If you have trouble the manual explains it. Those who aren't used to such enormous amounts of effects might have a hard time with it at first but it shouldn't be too much trouble for anybody to figure out, as long as they know what they want to do.

I can't say this is an amp that I enjoy using very much. Though it's got tons of features, it focuses more on quantity than quality. None of the distorted settings sound that great in my opinion. The &quot;blues&quot; tones just don't feel genuine enough to be bluesy, and the heavier tones are rather thin. The clean tones don't really give you the grit and power that a Fender Twin or a Marshall would. I used it in a rock ensemble and I had a hard time getting a nice, clean bluesy tone that would resemble Stevie Ray Vaughn (we were covering &quot;Pride and Joy&quot

. I fared better with Joe Satriani's &quot;Surfing with the Alien&quot; tone, although that too was kind of pale in comparison to his tone. The effects, by and large, are weak as well. The fact that there is so much variety with one amp means that you have less specific control of each effect. Plus, some of them just don't sound good at all. As far as digital amps go, you could do worse, but it's still not worth getting yourself into.

I've used this on and off in the rock ensemble for a year. I don't really like the tones you get, or the quality of the effects. The versatility of the amp is all it really has going for it other than sheer power (it does get REALLY LOUD!). I tried other Line 6 models but didn't really see much of a difference. I think it's a little bit too expensive for what it is; the Vox Valvetronix, while no champion itself, sounds much better and is far cheaper than this (or at least it was when I got it). I wouldn't buy this again, ever.
Did you find this review helpful?yesno
»

The configuration of the Line 6 Flextone 3 is pretty easy to follow and it won't take too long to understand what everything does. It does take a little bit of time to figure out how to navigate through the screen, but it is done smartly enough that it won't take too long. It is pretty easy to get a good sound from this amp, but it really depends on what type of sound you are going for, as some of the effects are better than other on this amp. The manual for the Line 6 Flextone 3 is pretty complete and easy to understand, and it is a good idea to have it around while learning this amp.

The Line 6 Flextone 3 is great for rock music, but will work in almost any setting. The effects range from delays and reverbs to modulation effects, but none of the effects are that impressive to me. This being said, they are usable and it is nice to have so many different types of effects within one amp. It has a great clean tone, but the distortion comes off a bit tinny sounding and I would recommend using a pedal for your overdrive when using this amp.

I've been using the Line 6 Flextone 3 for about a year and I have found it to be a good guitar amp. It isn't the best by any stretch, but it is a reasonably priced option for the intermediate player looking for an amp with effects. It is versatile and is perfect for the player looking to figure out what effects they like to use best. Overall, the Line 6 Flextone 3 is a nice amplifier, but I wouldn't recommend it for professionals in any situation.
Did you find this review helpful?yesno
»

beherit1's review (This content has been automatically translated from French)

The are saturs are despicable
talking about modlisations mesa boogie, it is shameful
a low volume still happening, but it is pushed a bit, looks nothing
clean sounds are quite good and against diversifis
interesting only amp in the studio and in the clear
for the rest, big sound, concerts, repet with a drummer, especially not choose this amp
nor any amp line 6 also
MODELING will never replace the lamps

Only interest: sounds clear and correct effect, and the price
anything more expensive hair we can found lamps amps
Pass your way
Did you find this review helpful?yesno
»
Read the 15 user reviews on the Line 6 Flextone III »