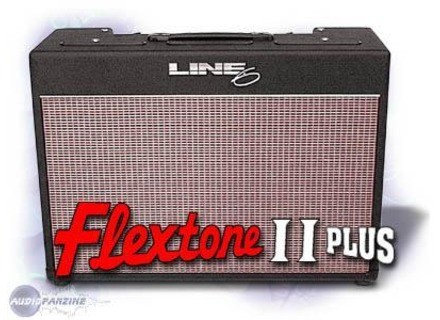 Flextone II Plus, Modelling Combo Guitar Amp from Line 6 in the Flextone series.

Line 6 Flextone II Plus
3
I bought this amp in Dublin, Ireland for 499 Euros because I needed an amp with enough versatility to get me through a rock covers gig.

I think the amp has some really good effects - particularly the chorus and delay.
The Rotary effect is quite good as well. I like the way the amp changes ALL the settings (levels, effects, rate...) every time you change from one patch to another.
I also like the way that the delay will "carry over" when you switch to a patch with no delay. That's a nice touch.

Well, at the en of the day - the amp is a computer simulation. Don't get me wrong, it is a very GOOD simulation. The main problem is that it just sounds a bit too digital. Also - the "Fender" sound is nearly impossible to get as loud as the more distorted amp simulations. Also - the really distorted simulations have very little treble and/or distintction. Overall, they're a bit too mushy and bass-heavy.

Although none of my friends have had any trouble with their Line 6 problems - I've sent my amp back 8 times now. I know... unbelievable. Although they tried to accuse me of "abusing" the amp and told me that I was lucky that they repaired it for free, considering that it would no longer be under warranty for damage that was caused through abuse or neglect - they have (to their credit) repaired it and returned it every time.

My thoughts are that this is a good workhorse of an amp if you need a lot of versatility in tone. I wouldn't use it for my original project because it souns too much like a computer but for going out and making money in a covers band, it has done quite well. I only hope that my amp was the bad apple in the lot and that not ALL of them are going to break down 9 times in 3 years.

Line 6 Flextone II Plus
5
I got the flextone plus off of Ebay in mint condition for 500 and i bought the cab for 200 (on sale) at the local guitar shop.

I Love EVERYTHING!! This set-up is the greatest!! its loaded with 32 amp models and 16 effects which kick serious butt!! i was soo sick of cords, from my pedals, now i only have 3 cords, one from the FB4 foot-controller, one to my Cry Baby, and the other to my guitar. Its got a 100 watts of tubetone technology that sounds almost identical to marshall tube half stacks on some certain sounds. and to you people that are worried about the amp not being loud enough...my friend and i turned it up to 40 watts and it sounded like we were in a tube for 2 days!!!

NOTHING...IT IS GREAT!! (a little heavy though...but most amps are)

built perfectly, no flaws...it is in mint condition...i have a cover for the amp and the cab and i would recomend buying covers for both of them if u want to keep them in pristine condition...it is very durable but they covers can pretect it from getting minor scratches and dings.

Great set-up for people who like great sounding amps, for people that want to save money, and for people that hate cords! U might be asking yourself, how can this amp save me money? Now last i checked stomp box pedals cost between a hundred dollars and 150 dollars, and before you know it u could easily spend over 1,000 dollars in pedals. This set-up has the perfect sound for any style of playing, whether it be blues or death meatal!
BUY IT!!!! OVERALL GRADE: A+++++++++

Line 6 Flextone II Plus
5
Won this amp rig on EBay. My band plays a wide variety of covers from modern rock to blues to folk to jazz. This rig included the Flextone II Plus Amp, Extended 2x12 Cabinet and Floorboard. Custom Tuki pad covers were included for all items. $710.00.

With complex equipment comes complex learning curve. Patience is key here. You need to study this amp and fine tune it to your liking. The work is much but it's worth it.

Great choice for those who want all kinds of sounds and amp models. If your willing to tweak and learn, you'll be happy.

See all 5 photos of Line 6 Flextone II Plus »