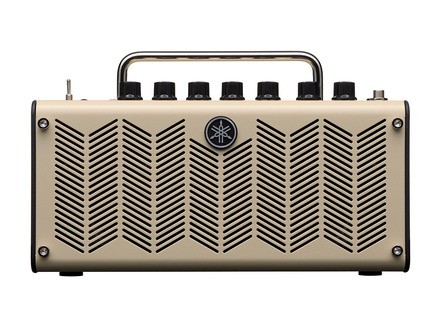 View all offers for Yamaha THR5 »

Yamaha THR5
5
I just wanted to clarify that Don_Viviano said anything n
thr 5 is not 5 watts but also 10 Watts. these are exactly the same amps.
even puissance.seul diference, you can save the changes and no volume control external source. as regards the absolute power remains the same as the 10 thr.
therefore 190 euros c is really cheap for a product as geniale quality

c is the bomb

Yamaha THR5
3
Amp compact (indeed it should be placed in the category Travel amps in my opinion) that operates either on AC or battery.
5 amps modeled: clean, crunch, lead, british hi gain, modern.
4 effects: Chorus, Phaser, Flanger and Tremolo
4 Time / reverb
1 tuner
Entry in the
USB output for recording (a simplified version of cubase comes I think)

Gain setting and tone, and of course volume.

5 watts and a very cool look. The amp is also very light.

The config is intuitive, it has traditional knobs. The amp is designated by a selected LED.
When the lights, grille lights so dim, reminiscent of a hot lamps vintage amp.
Once the rule is selected amplifier gain and tone, adding one of the four effects or not, then reverb or delay or 2.

The sounds are pretty good. Unlike a lot of amp modeling, you do not fall in the cartoon, was rather a sound that resembles a known amp, which is close to ... Without having the full sound signature.
It sounds like what an amp.
The sound is crystal clear, recalling the Fender cleans.
The crunch remains clear long enough, then crunch like a Vox AC 30
The lead sound emulates the sound of the 60s Marshall (Plexi, JTM 45 ...)
Hi Brit sound is similar to the Marshall JCM 800
The sound reminds her of Modern American amps such as Mesa Boogie (Rectifier).

Like I said, there are sounds that recall the legendary amps, without caricature. Must raise the tone of some models do not have that sound muffled and without the presence What a lot of modeling amps, but you get there.
The amp has a correct dynamic without being amazing.

Level effects, they are like the amp models, all playable without being hyper typed.

I must say that I am a bit disappointed, I saw a video of Yamaha THR-10 that I was blown away, I could try that version 5w, 10w but if is similar, but the sound is okay not up to what I expected, even if it is better, to my ears, my Vox AD-15 for example.

In summary: a good amp travel, with only 5 sounds at your fingertips, but all usable without falling into caricature.
The manufacturing quality is praised by lots of shops and testers.
At the sound is really nice, but for 200 € new, it is expensive. To see if the 10w (for € 300 anyway!) Defends better.
I thought my Vox AD15 replace (which I use for home) with it, but ultimately I keep my Vox, I found a little less good. This is the price of Yamaha that I find too high for fun at home.
Who knows, if I get the opportunity to 10w, maybe?

7 of 12 people found this review helpful

View all 6 videos of Yamaha THR5 »

Yamaha THR5 manuals and other files