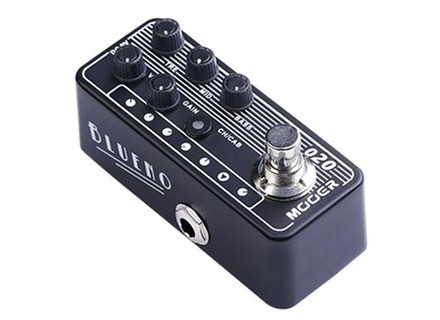 
Of all the preamps I’ve used, this is by far one of the best; and it makes other pedals sound incredible. There is plenty of warmth and dynamics in the notes, whether playing on the clean channel or the distorted channel. The clean channel sounds very full and rich, whereas the distortion is completely unique in its quality and tone while delivering some high-end sparkle. Both channels sound very amp-like and non-sterile, although it should be noted that the distorted Channel 2 is not high-gain (Metal)… it’s Rock-based or meant for less aggressive playing. Regardless, adding any high-gain pedals to the clean channel sounds marvelous and to the point that it now has become my number one choice of preamp. Even the cabinet simulation in this pedal works well enough that I did not use any other cabinet simulation or load box in the demo video.

Although I have several preamps, and some are very specific in quality and sound (as found with Marshall plexi tones), there is something very different with the Blueno 020 preamp and Mooer really captured something great in this micro pedal. The term ‘organic’ has been over-used when describing tones and equipment (whether digital or analog), but it certainly remains true and appropriate with the Blueno 020. I ran other gear into this pedal, including a vintage fuzz by Doc Music Station and the Friedman BE-OD Deluxe and the results have been superior to other preamps that tend to produce a more sterile or thinner sound in comparison.

OVERALL IMPRESSION:
This preamp is based on one of the best sounding amps that has won various awards, including the Guitar Player ‘The Years Best Gear’ for 1997. Mooer’s Blueno micro preamp 020 emulates the Bruno UG30 and has done a fabulous job at recreating those superb cleans and unique distortions with dynamics and richness that makes this pedal a must-have. It sounds great on its own, whether playing Blues, Jazz or Rock, but when utilizing your favorite dirt pedals into the clean channel you will achieve full-bodied flavor that truly is amp-like. The built-in cabinet simulator seals the deal and whatever technology went into that surpasses what other cabinet sims I have on hand could do… the others sounded fine, but not nearly as good as the built-in cab sim found in the Blueno 020. At a price of $119 Canadian (about $99 USD), this is such a great investment if you’re looking for quality rich tones and a preamp that pulls all the details from your favorite pedals.

EASE OF USE:
The Blueno micro preamp operates very much like an amplifier. First, there is a basic 3-band EQ (treble, midrange & bass), with volume and gain knobs. Those are fairly straight forward, although I found I needed a lot more treble and far less midrange and bass to get the tone I wanted (very smooth and thick with cleans, but a bit muddy with dirt pedals if you try to push the mids or bass too much). The footswitch works within a dual operating mode, to be addressed later. The LED button serves two purposes, also addressed in this section. Thus far, operating the Blueno 020 preamp is straight forward – adjust the EQs and the amount of volume/gain (that desired and relative to how clean or driven you want it and whether using dirt pedals). Now, onto the footswitch and the LED button: as with most pedals, the footswitch turns the pedal on and off. However, if you hold down the footswitch for 2-seconds it then switches between Channel 1 and Channel 2 without shutting anything off. If you allowed the footswitch to act as an on-and-off control, then you need to access the Channels via the LED button. Now, if you hold down the LED button for 2-seconds the cab simulation engages, which not only sounds perfect with this preamp, but which makes it very useful for direct recording/playing to a soundcard, powered monitor or P.A., and without the need for a guitar amp or speaker cab.

RELIABILITY & DURABILITY:
Measuring 9.35 x 4.2 x 5.2 cm (DxWxH) or 3.7 x 1.7 x 2.0 inches, and weighing only 160g, the Blueno micro preamp 020 pedal feels heavy for its size, thus suggesting a steel chassis. The footswitch has a solid feel with a soft switch-over (no hard clicking) to turn a Channel on or off or to switch between Channels. Although close to the other knobs/controls and the LED light, the footswitch is set quite a bit higher to those smaller knobs/button to prevent any foot-stomping accidents. The EQ, Volume and Gain controls are small, but are of good quality; and their pots turn smoothly and without feeling loose. The input/output, including the power supply input, all are located low on the pedal (toward its base), thereby providing more clearance of a stomping foot. The Blueno 020 requires a 9VDC power supply with 300mA to function properly (connected in the back of the pedal), although the manual claims a 220mA draw (consequently, best use 300mA).