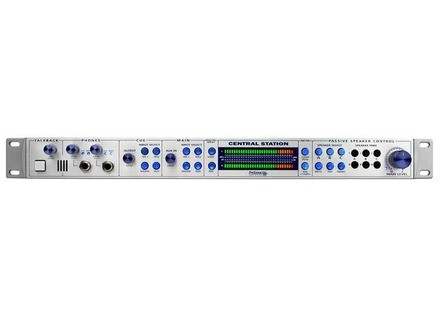 PreSonus Central Station
5
It has all options needed to monitor while mixing. Checking mixes in mono to stereo with a push of a button. Able to use your subwoofer when needed to find that low end. Talk back button when recording with an artist in another area that they may not hear you well from. No cons here.
Did you find this review helpful?yesno
»

PreSonus Central Station
5
PreSonus's Central Station is a device designed to be the base for your recording studio. It is like the Mackie Big Knob, where you route your monitors and everything through it. It doesn't make or process any sound of it's own, it's really just a very helpful utility tool. As far as connections go, it has three sets of stereo 1/4" outputs for your monitors, making it easy to switch between A, B, and C monitors, as they are labeled on the Central Station. It also has two sets of stereo 1/4" line outputs and two sets of 1/4" inputs in addition to RCA aux inputs. For talkback, it has an XLR input for the talkback mic and a 1/4" connection for a pedal. There is also a connection for the external remote controller for Central Station, which is the called the Central Station Remote, or the CSR-1 for short. Lastly, it has digital inputs for SPDIF and Toslink. The front of the device is split up into different sections for talkback, headphones, cue, mains, passive speaker control, and metering. The talkback has a simple button to engage the TB mic, and the headphone section has two 1/4" headphone jacks and leveling knobs for each. The main and cue sections have routing buttons and leveling knobs, while the speaker control section is where you can choose between the different speaker outputs. The metering is bright and easy to follow as well. That's pretty much all that you need to know about the Presonus Central Station, which isn't too much but is certainly enough for something like this. I've seen this in action in both professional and home studios, making it a rare breed of gear that can crossover easily. If you're looking for something to anchor your studio down and to give you easy access to routing and monitoring, absolutely check out the Central Station.
Did you find this review helpful?yesno
»

djxcapitain's review (This content has been automatically translated from French)

PreSonus Central Station
Hello, I'd like to know what is the best way to connect to this interface are mac. (I have 2 toslink jack input on my mac) Thanks

PreSonus Central Station
5
4 years, I had the big knob bcp less neutral ...
I like its transparency, reliability and versatility.
Good Q / P, yes I will ever even with this choice the evolution of my equipment from ...
Recommended and convenient remote control and control of micro order with a foot pedal (not included).

Did you find this review helpful?yesno
»
Read the 14 user reviews on the PreSonus Central Station »