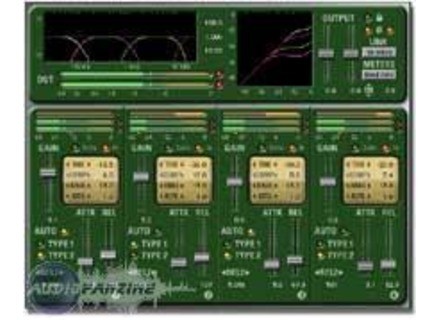 McDSP MC2000 HTDM
5
The McDSP MC2000 HTDM plug-in was quick and easy to install and I had no compatibility problems or any other types of issues.  After installing the plug-in it didn't take me too long to get accustomed to using the MC2000 as it is pretty user friendly and I was familiar with the make up of other McDSP plug-ins from using them in the past.  Being that it is basically a multi-band compressor, the McDSP MC2000 HTDM has four separate band, each of which has sliders for gain, attack, and release and also has numerical parameters for threshold, compression, knee and bite.  The plug-in also has graphs that really come in handy that show you exactly what you are doing to your signal.  I've never seen the manual for the McDSP MC2000 HTDM plug-in so I can't say if it would be helpful or not.

I can't recall any times that I've ever had any problems running the McDSP MC2000 HTDM.  It always seems to run pretty smoothly, but I generally don't run too many of them at a time since it does take up a bit of processing power since it is a multi-band compressor.  I am currently running the McDSP MC2000 HTDM on a Mac Book Pro that has a 2.2 Ghz Intel Core 2 Duo processor and 4 GB of RAM.  I run the plug-in in Pro Tools LE 7.4 that runs off of a Digi 002R audio interface.  How well this plug-in will run for you really depends solely on your machine and general configuration.  Of course if you are running Pro Tools HD you will probably be able to run as many of these at once as you'd like, but for those of use using LE and other sequencers I would recommend using the conservatively because it does take up some processing power.

I've only been using the McDSP MC2000 HTDM plug-in for about six or eight months but in this time it has become a mainstay in my rig for mixing.  I love the sound quality and I love how much control you have over your sound as the four bands and all of the parameters provide you with a variety of options.  The price of the McDSP MC2000 HTDM isn't too cheap and for this reason I would really only recommend it to professional studio owners and larger home studios.  However, it is definitely a plug-in that is worth looking into as it sounds great and is easy to use.
Did you find this review helpful?yesno
»