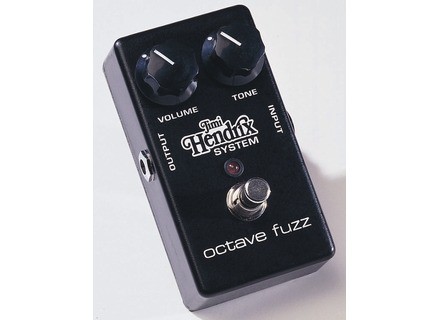 Question settings, one volume, one tone, nothing complicated here either.
The volume is somewhat gradual, but quite the gain increases. The tone gradually added treble and the octave is suggested in the second half of his race.

Do not wait for this Octave Fuzz harmonizing an octave well defined. The octave is rather a "halo" of frequencies that strengthens the fuzz side. It snaps, and the first thing that comes to mind is to play Purple Haze. It is in a register rather muddy (especially in the low notes), hairy, even violent if you push the volume.
The JH3S is rather "pedal-friendly", a kind Tubescreamer overdrive chained behind a few rounds the rough side. Or wha its upstream and disintegrate (poor HP ...).

I was looking for a fuzz rather messy, I have found. In addition, it does not take place in my pedalboard. I have not found him in default. Access to the battery, to quibble, but personally I use an external power supply, so it is no longer a problem.