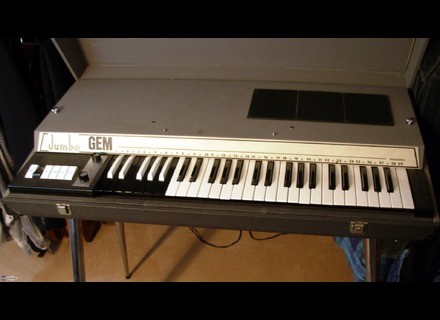 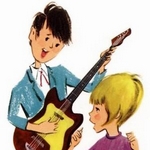 GEM Jumbo
4
the organ pageantry in this picture is not the jumbo 61; it is normally imitation wood color, it has 10 presets situs white on the top, left and 5 knobs is indicated above "Jumbo 61"

The model pictured here is a simple "Jumbo", similar to the model antrieur and Vox Jaguar component level

...dropoff Window
Did you find this review helpful?yesno
»

nightmarica's review (This content has been automatically translated from French)

GEM Jumbo
3
organ 4 registers: horns, strings, reeds, flutes
the lowest octave can be played either with single register either enclanchant a bass for accompaniment. organ possesses a vibrato too.

difficult to make a simple organ, its a button.

the origin of this organ is a clone of the Vox Jaguar. these two organs was built in the same factory, by the same manufacturer that Vox has asked to take care of the era was a construction.Vox build guitars and organs in Italy, always by the same constructeurs.a know Galanti for organ (galanti is derreire manufacturer GEM) and EKO or Crucianelli for guitares.et so these brands are eager to make these instruments cheaper clones, having also the possibility to use the same parts. and therefore the gem jumbo has recouped some of the internal maps, and not bad Part Vox Jaguar.
I had a Vox Jaguar for a few years before finally selling it to eventually fall on GEM Jumbo.Donc I will try to give my impression after my memories to compare.
Second, to give an idea, I could listen to my jumbo revision before and after revision and clearly there is a huge difference. So I advise not hesitate to change all the old condos, it removes the breath, records are more powerful, do not take this lightly.
So in terms of sound, I think we are really close to the jaguar in the grain, but with less distortion in aggressive son.moins I dailleurs plugged a small lamp behind overdrive, but pain and once you get a hair Jaguar.
and I wondered why this organ was completely spent innaperçu, knowing that VOX is worth more than a thousand euros.
an interresting thing is the difference in sound that are between the amplifier output and the sound of the built-in speaker. amp output on the sound is clearly defined, while the HP sound is rock and roll wish, ca growls hell. dailleurs I do most of my shots with a microphone on the HP, the sound is amazing.
tremolo when did his job, and even if it is next revised or not the amplitude will be different. but anyway this tremolo is very correct.
slightly below all the same to that of the Vox, admittedly.
Ects for which the party has switched to bass accompaniment, it's good too, the sound is quite muffled grunts and well, with a good amp behind there way to make a true support for a guitar.
I would add that his evel this organ also has accents on a Farfisa register.
Ok, this is not a vox, but building level it is very well done and the keyboard is much more pleasant than the Vox, in short we feel that these two instruments have been built by the same people in the same factory and that the differences are quite small and what makes the big difference is the magic of the Vox brand. but honestly if a vox listening 1200euros the jumbo level quality is at least 500!
objectively.
In short, if you want to be close to a Jaguar not even half the price go ahead and with the price difference buying a good amp to go with. or effects. I say that because after the amp it can sound cheesy cheesy sweet as aggressive.
On youtube there is a fairly full and interesting video to get an idea. the first part is pretty sweet oriented atmosphere and the second part ca growls plus.mais level miking, it can sound tougher than this video.

I use it for 2 years now, this organ is very endearing, vintage look, construction, very pleasant keyboard (better than the Vox na!).
I do revendrais probably never, because I have my vox at an affordable price and with ca not need another organ.
If you see a jump over and above made the revision!

It sounds terrible!
The doors, iron butterfly wherever there has continental vox, it is close!

In comparison with a vox jaguar, the same sound and because the same pattern, the same components, with a touch more enjoyable!
At a little heavy to move with limit ...