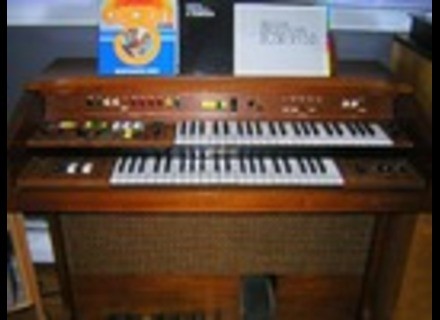 Electone 205D, Organ from Yamaha in the Electone series.

Yamaha Electone 205D
4
I don't really know whether I like this keyboard's sounds or whether they are just funny. It's really an organ with some settings that make it sound like an electric piano. The sounds that come out of this are similar to the ones heard on the score to the movie "Napoleon Dynamite", if that rings bells for anybody. There's a couple different settings, some are labeled guitar, strings, etc. but they are pretty much irrelevant as they don't really sound anything like those instruments. The dual keyboards both cover different octaves and are easy to switch between with both hands. There are a lot of drum sounds and rhythm sounds going on, but they are also very cheesy. I don't know if I would ever record with them unless I was going for that campy effect. That being said, these are PERFECT for such effects. I doubt these would run you much money, and if you have enough down time to mess around with this stuff, it can be fun, if a little mindless. I'd say get it at a garage sale for dirt cheap, but nothing more. I have fond memories of this thing, so I like it, but don't get the wrong idea, it's not the greatest electric piano I've seen. It's mostly fun for dinking around on your own as a one man band, and I've actually been able to entertain people with silly songs while playing it. Probably the best instrument around if that happens to be your ambition.
Did you find this review helpful?yesno
»

Yamaha Electone 205D
5
The Yamaha 205D Electone is a dual keyboard electric piano that also has foot pedals and a ton of different tones and effects.  It has built in drum samples and loops in all sorts of styles and has switches for changing your tone to model after all sorts of different instruments.  It also has effects like vibrato and sustain and has presets for vibes, guitar, and piano.  It has a volume pedal as wel and also has a built in speaker.  While there is a lot going on with the all of the different sections and parameters of this keyboard, after playing around with it for a little while I was able to figure out what everything does.  However, I am always finding out little quirks about this instrument the more and more that I play around with it.  The sounds that you can get across the board are pretty cheesy, but at the same time they have a pretty cool quality to them, although some are certainly better than others.  I really like the vibraphone preset that this has and also really like the different acoustic instrument simulators as blending them can get you some really cool sounds.  One of the best parts about the Yamaha 205D Electone is that it has a section of arpeggiators which adds all sorts of cool sounds to the mix and I generally like to have one of the arpeggiators going at all times.  With the arpeggitor and rhythm section (which contains options for bass as well), you can pretty much have a little one man band going with this.  While the sounds are unique and fun you can't really get serious organ or piano sounds on this keyboard so you really need to take it for what it is and that is a unque sounding keyboard!