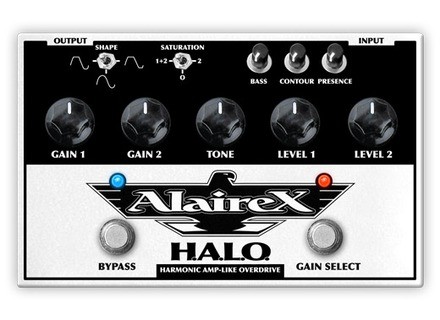 titienou's review (This content has been automatically translated from French)

The manufacturer's trademark black and white, it is made to play on a clean amp.

Possible to use either:
1), rhythm / solo with two channels allowing for the clean amp
2) to cover very different saturations or attack different styles on each channel

In use it is a really nice little toy.

Can act on a lot of parameters and where Alairex sell a "universal" pedal, I must say that indeed it is possible to have a large amount of sounds available if the options and knobs of the pedal is handled.

There nothing to say, the "amp-like" is it is not at all in the cartoon effect with distortion sounds very typical but really as if we had a Marshall JVM in a small box with all the extent of its capabilities

Yes, because we must say that the sound is much more typical British side (Marshall) than U.S. (Mesa). But it is not really a problem for me quite the contrary.

I managed to cover with the full pedal registers ranging from soft rock, punk, metal to 80's (megadeth, metallica, malmsteen). Not the right pedal to the death but we can attack the trash if they put a little boost before alairex

Used for 1 month I'm really enjoying the play is musical, beautiful and full of opportunity to shape sounds make the central part of my pedalboard. Some associate it with a eventide H9 and Torpedo CAB into a Wordfast Anywhere configuration. A test ...

The price is certainly not cheap but it is the kind of material that will not change now. For example for comparison, I laché a Blackstar HT-DUAL and a Mesa V-Twin pedal for this. I think it sounds much better, it is more versatile and easier to integrate into a pedalboard (standard power supply, not too big, not too heavy).

See all 11 photos of Alairex HALO »