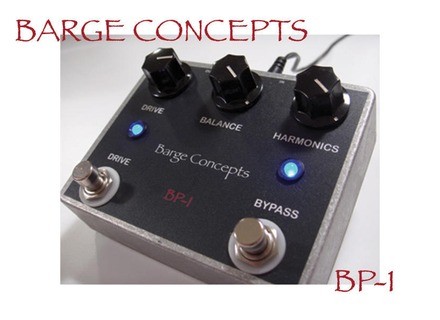 
2 user reviews
Find it in the classifieds starting at $61 Avg used price: $98

Barge Concepts BP-1
3
This is a very unique, somewhat alienating distortion pedal. It is supposedly made to mimic an older distortion pedal, the HP-1 which was made by a company called Interfax. It's an analog pedal, and has one input and output (1/4"). It is mainly used for more bizarre, intense distortion effects, used by some more experimental rock bands. It's not computer-ready and is not rackable.

The editing of this pedal isn't too complex. There are four knobs and two switches. The four knobs are for Drive, Output, Balance, and Harmonics. They aren't difficult to use, the only issue is knowing when the effects are on and when they aren't. The left switch is an on/off for the entire pedal, whereas the drive switch affects only the left two knobs, which are useless when it is disengaged. The manual explains all this, though I really didn't know what much of it meant until I tried messing with the knobs on my own.

I'm not completely sold on this pedal's sound. I was hoping that it would resemble the Harmonic Percolator, which I only know through listening to records by Steve Albini's projects Big Black and Shellac. These are known for having insane amounts of noise and feedback, which I often find really interesting and inspiring. Since this product was sold to me as a clone of that pedal, I was expecting that to be the case. Instead, I found that this pedal was only capable of producing mediocre overdrive tones (which robbed me of massive amounts of volume). Beyond that, the extreme noises I was searching for were piercing and high, and generally not applicable to the kind of music I wanted to make. Another main beef I had with the pedal was that when I wanted to get rid of noise, I had to lose a ton of volume. When I wanted volume, the pedal would produce a ton of noise to go with it. I wouldn't mind so much if the pedal had other redeeming qualities, but I didn't really find anything I liked. I tried it with my Strat and my Les Paul, both running through a tube amp. I had better results with the Les Paul but I still wasn't really satisfied. While the distortion mimicked a few other pedals that basically lower the voltage of the pedal, it didn't have the range or versatility of those pedals, and the tones were almost always inferior.

I wasn't totally happy with this pedal, as it couldn't produce the crazy noise that I wanted. Instead, it gave me some noise in places and frequencies that I didn't want. It was more of an overdrive pedal, and a lackluster one at that. I'd say avoid it, look for something that's more similar to the Harmonic Percolator, and go for that, or the original.
Did you find this review helpful?yesno
»

Bourmix's review (This content has been automatically translated from French)

No need for manual knobs are turned, the center is a mix to vary the intensity of the incoming.
Simple

Oulala: the slap!
It's very intermdiaire between overdrive / fuzz / distortion because the knobs and the boost can have the three sounds.

Its very strange to Shellac / june of 44

In short pedal Fabulous! (Provided you like the style)
And I've tested the overdrive: EH / Fulltone / Catalinbread / Boss / Zvex, etc. ..
The sound is literally "déchirré"

Conviend but not all styles.

For control is simple:
Order on the site of Barge: 1 month + 2 weeks manufacturing sending
Bought $ 145.
Did you find this review helpful?yesno
»