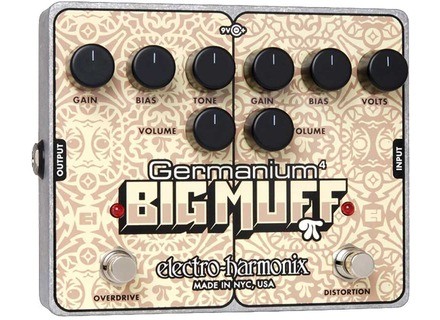 Not read the manual
Ultra simple, the "volt" button to simulate a dying battery is really interesting to get very heavy very grimey distos

used with a Strat and a 335 ES, obviously there is a difference of gain but it is manageable. I often combinais the two floors of the front foot, but I now use rather independently. The sound is less messy and there is less volume surges.

I have 2 years I think. Before I played on DS1 and DS2 and multi purpose but I was looking for a good vintage sound, or this pedal it all: rich in midrange distortion, vintage palette of sounds nice grain without a gas plant .. . For a really great price. That said it does not replace a good OD and a separate distortion in my opinion. I think more to acquire a Boss BD2 to complete a hard-OD, Germa and keep only the distortion with two gain stages background

Gab66's review (This content has been automatically translated from French)" Germanium, my love!"

We have a channel "crunch / overdrive" and a second "fuzz / distortion", the two are combined. Tone settings independent bias also level and gain, plus a last simulating a battery or amp end of life on the canal more biting.
In short, a total of three distinct sounds directly accessible by foot.

There germanium and it feels! The dynamics of the pedal is purely astonishing! Each channel has its own personality, the first remaining in overdrive quite content, can take the place of boost, the second is much more biting, eyeing the Coote acid fuzz with more gain!
The knob simulating the state of battery provides a well disgusting!
I admit I was a little less convinced by the sum of the two where the breath reigns and where they should be securely fastened to attack it right!

A nice pedal, fun to use, as a circuit which responds to lights, sounds warm and organic with a real personality ... To try to fall in love (or not).

jeanloupPecquais's review (This content has been automatically translated from French)

A switch to enable each party, both combined, short rolling!

Good first warning, it is not plug and play!

Please take the time to know the beast to understand how react adjustment, especially the knob "volt"

Otherwise it works in 9V, there is a bias knob that acts as a compression the rest is relatively basic.

While some focus:
Despite its name this is NOT a Big Muff! Some say that it is me yet his name, yes, but that is somewhat misleading, let me explain.

This pedal has no grain of classic big muff, very heavy, with a large sustain etc etc ... Do not think you can output audio on the gilmour comfortably numb solo as with this pedal. It really has nothing to do with her cousins ​​Triangle, Ram's Head and other Sovtek resurrected.

That being said, this is by no means a failure, it is typically vintage with. A wide dynamic range (the overdrive clean boost with uncompressed audio that's what sublimate your clear sound)

From the distortion alone is a bit limited and makes sense for the game boosted with overdrive.

Small note: the amp has ample almost mandatory to truly harness the beast: I tested it on a fender blues deluxe is a treat!

Excellent pedal from EHX who had disgusted with his big muff ressuis USA is an unspeakable horror! (For those who are happy with, tried the big muff clone the old shop that big muff, then it rocks!)

I used to play floyd 70s (up wish you were here) it was ideal.

I do longer serves for some time, I went on sounds more modern, but it brings happiness to my daddy!

Anyway, I recommend it strongly!

La Noix's review (This content has been automatically translated from French)" Versatile but great anywhere."

Electro-Harmonix Germanium 4 Big Muff Pi
4
It has already been marked.

It is relatively simple to understand, it has a lot of possibilities, but it is quite complicated to find his sound between the bias adjustment, and the gain volts.
I mean even when you couple the two if it goes not feedback.

It has a lot of possibilities but even with a tube amp is not get great results, the sounds are nice, vintage typed enough.

I found the volt on the distortion quite nice, which provides the Fuzz. In fact it is really setting the volt I liked this pedal.

The Bias setting can also be opportunities rather unusual but not bad at all.

In the end it is a pretty cool pedal, very versatile and distinctive vintage that will fill a transistor amp and will provide a real plus.

However, for a tube amp, I can not find the height, it is very versatile but it is nowhere good.

In any case seen the price new, it is really worth and even more opportunity.

Did you find this review helpful?yesno
»
Read the 11 user reviews on the Electro-Harmonix Germanium 4 Big Muff Pi »

Other Electro-Harmonix other guitar saturation effects