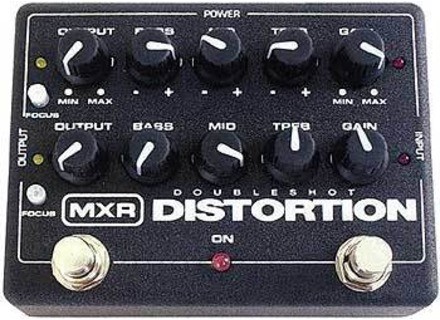 MXR M151 DoubleShot Distortion
3
The MXR M151 Double Shot Distortion is a dual channel distortion pedal. It has two distinct sounding channels and five parameters on each channel. It also has a focus button (compression?) on both channels. I believe it is an analog pedal and it has a 1/4 inch input and output. It is not rackable as it is a stomp box.

The configuration/set up of the pedal is pretty simple to follow and it is easy to manipulate. Both of the channels have the same five parameters - output, gain and 3 equalization parameters - bass, mid, and treble. Each channel has a 'focus' button on each. I'm not sure exactly what this button is made for, but to me it sounds like it adds a bit of compression to the sound. I never needed to look at the manual so I can't say if it is useful or not. The pedal is pretty easy to figure out how to use.

Overall, I'm not really into the sound that this pedal produces. The distortion comes off a bit too tinny and gritty for my taste. I have only used this pedal with guitar - a Gibson SG and a '76 Fender Twin Reverb Amp. While I like the top channel the better than the bottom, neither sound full or powerful enough for the sound I am going for. I bought it because it seems like it would be a versatile distortion pedal, but to me most of the sounds I get from this pedal aren't great sounding and are almost unusable.

I had the MXR Double Shot Distortion for two years before I sold it. While it is easy to use, and seems versatile on paper, the sound quality isn't spectacular by any means. I have since switched to using a Nady TD-1 Tube Distortion pedal and a Boss DS-1 distortion pedal to get the two different types of distortion tones that vary from a heavier distortion, to a more tube driven distortion, which is what I was hoping to get from this pedal. Maybe my expectations where too high because of the price and that I have liked MXR pedals in the past, but either way I was unable to get the sounds I wanted from this pedal. All in all I wouldn't recommend this pedal, but I would go out and try it to see if it fits with the type of sound you are going for.

Two fully independent channels with their own bass and treble controls plus a mid filter (which is rare enough to deserve a mention on its own, especially given the importance of the mid frequency range in the guitar's overall tone).
Two Focus switches allow interesting sound modulations (especially on the high-gain channel).
Only weak points:
1. The electric power can only be supplied from a external PSU (no battery operation) and this is not always convenient for mobile guitarists.
2. The Focus switches are too small and can hardly be operated with your feet.

On/off switch and channel-select switch. It's simple and effective.

But it gets complicated when it comes to setting sounds with the knobs because they all seem to interact, like on the Fuzz Factory for those of you who know it. Something that can be really confusing when you are getting to know the unit is that when when you increase the lows you also increase the highs.
This flaw is not too obvious in the high-gain/metal channel but flagrant on the vintage channel.
So you'll need a certain time to get the sound you're looking for and I recommend you to write down your settings on a sheet of paper, otherwise you'll spend a lot of time trying to replicate that huge sound you got out of the beast once.

I agree with the other reviews posted on this site regarding the sound quality of the pedal. It's a mid/high end product. Taking this into consideration the price is more than justified.
In the beginning I found the high-gain/metal channel much better than the vintage channel but now, with an accurate setting of the second channel knobs and the pre-boost, I can really get the best out of this awfully interesting channel.

To give you an idea about the sound, I would say the high-gain channel evokes Metallica (without the Mesa character). It's really good for thrash metal but can be disappointing for death fans (gain and low-end are a bit too weak for this music style).
The second channel made me think immediately about Black Sabbath. It clearly has a vintage character (dirty and with less attack) and produces a huge low-end, perhaps a bit too big.
Maybe some will criticize the slightly twangy highs of the pedal (there is indeed no comparison to the ultra nasal sound of the MT-2) and not everybody will like the typical MXR sound. Although the twangy character is much more present in the vintage channel.

I've been using this pedal for one and a half years.
Both channels complement each other which is very interesting. You can simply switch from a fat vintage rock sound to a sharp and blunt modern sound. This possibility to toggle between the 70's and the 90's is a lot of fun.
I also purchased a Jeckyil & hyde pedal (V2). For me there is no comparison: the Double-shot sounds definitely better (only the overdrive channel of the J&H is interesting, the second channel has no character at all).
If this pedal ever gets lost or stolen, I'm pretty sure I'll buy it again. I don't know of any comparable product in terms of quality within this price range (although I must say that I haven't tested the Silver Dragon).
Did you find this review helpful?yesno
»

the two channels are nearly identical in terms of sound, one of the two has more gain than the other!

two-channel setting for each channel:

both channels are used at the same time (not cumulative)

the setting (EQ) is very sensitive, very responsive and reacted between it (move a knob modifies the influence of other!)

focus button (available on each channel) radically changes the universe of sound (blues / rock to metal, for example)

the sound does not bleed!

he who can not find the sound that suits him not managed to settle the just!

must spend a lot of time adjusting the EQ! it is very complex! but very very effilasse!

it may beings its quality as its default? you can make it sound like a crappy pedal if you did not understand and can do well with if you take the time!

I tried this pedal with a Les Paul classic micro 57 and micro american strat lace sensor in a JTM45 Marshall and a Fender Deluxe Reverb!

Nothing complicated at this level, either that or spit it hard!

This pedal sound or not, according to the gear used
For me it is racked on a Fender Tele in seymour alnico pro, an Epiphone sg EMG81 and Eclipse ESP 81 and 60.
Level amp, I plugged into a Marshall or mode4 a Blackstar 50H or 50 Traynor. In any case it sounds, believe me.

In short I would say that such a machine possèder believing ringing his ibanez rg trash on a transistor amp quelquonque is a utopia!
As against a good shovel and a decent amp sounds. I read it & then various opinions that have pushed me to write this .... Yes it is a pedal metalheads! I would add that given the weight it does and the structure it has, it will survive WW3!

1 of 9 people found this review helpful

Did you find this review helpful?yesno
»
Read the 11 user reviews on the MXR M151 DoubleShot Distortion »