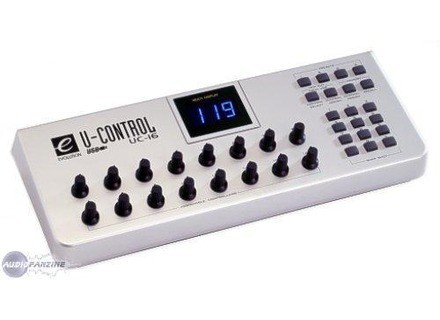 Evolution Uc-16
4
I rated the Features at an 8 becuase for the price and the software presets that came with the device. It was cool to see that a little thought was put into adding presets for some of the more popular VSTi's out there. The CD came with a few demos of the excellent NI soft synths, and evolution in house CRAP STUDIO V.2 DO YOURSELF A FAVOR AND DONT INSTALL SOUND STUDIO II. If you even get the application to work, you'll 2nd guess your purchase because it looks like a Fisher Price toddler program. I had to switch it to NT Compatible mode since Im running windows 2000 and the piece of trash became overloaded with my VSTi's and crashed several times. So aside from that, I was very pleased to actually be able to use some presets. The driver install was not as difficult as alot of people on the net claim it to be. It was actually very simple, and I was using it in Reason 5 minutes after it was out of the box.

VERY EASY to use. Plug it in. Activate the midi port. twist some knobs.

Evolutions units are the cheapest I have ever felt. This device is no exception. The knobs are no bigger than an eraser on a pencil, and the indicator dial is solid black, and not very raised. this makes it damn near impossible to take a visual snapshot of your controller config. The box weighs 1 pound, and the back lacks a midi out, although they show you how cheap they were to not include it. I DO LOVE THE LCD SIZE THOUGH. I wish it showed more, but for 100.00 bucks, it's way worth it.

I love the little box. It's cheaper than a phatboy, and you can hook up 5 to one machine. It's a neat device if you need the knobs. However if you have a ton of knobbed devices around the house, just daisy chain those ho's and save the 100 bucks and go to the pawn shop and try to scam something you can make noises with.

Originally posted on FutureProducers.com
Posted by: Unknown ( 1-, 2003)
Did you find this review helpful?yesno
»

Mrwaw's review (This content has been automatically translated from French)

Evolution Uc-16
5
I use the UC16 from dernire weeks. J'hsitais between the UC16, the new Spin Doctor Kenton, the Pocket Dopf, and Phat Boy. The Phat Boy is a toy that does not mne trs far the Dopf is strong but the presets are horrible select (dip switch), and I found the Spin Doctor anywhere in France!

Yes, the big question is ngatif the use of small pots while tight on the UC16 ... but frankly the aluminum case is not so cheap as a whole and looks strong enough (at least for the home studio).

! Important point!
Information is transmitted by twelve o'clock the USB connection (which also brings his energy the UC16, so no power supply) not need a MIDI input port supplmentaire, and more MIDI Out of the UC16 may be used by the squenceur ... making 16 output channels and more in the Systm! plutt is a cool ...

Operation is a breeze for VSTi ... factory presets are nice, but it is just as fast to its own small kitchen: there at your fingertips and 4 presets CASC direct (one button) control 16 noon on any information midi channel or controls 64 indpendants! Plus of course the 21 presets Autes ...
What a joy to play on the P52 filters rsons

Frankly for 150 Euros (price shop cheaper VPC), I doubt we can do better, even in the same building self.
Did you find this review helpful?yesno
»

Crossing.mind's review (This content has been automatically translated from French)

Evolution Uc-16
4
I have the CPU for 1 month now and am generally happy.
it is true that the smallness of the pots is not gnial.

Cons: USB connection, which sometimes made his own:
- Cubase not find it, must deplugger the UC16 and replugger ...
- Or sometimes does not receive full enregistremement cubase nothing and receives 10 surprise measures further!!

I pass briefly on an adapter and the connector over MIDI and no points.
Did you find this review helpful?yesno
»

Lbl's review (This content has been automatically translated from French)

Evolution Uc-16
4
Don I had a twelve o'clock that the controller was not expensive usb and small cracks so I ...
Well it's been a week since I use it and a part of the installation problem on Win2k Pro I am very glad I play live with Ableton and rewire in Reson and this little controller saves me a lot of dboire with the mouse and switch between the two programs I finally allows manipulation of small live not with my mouse and my keyboard (focus on issues of window ...)
Thank you for this product

for the installation problem I explain my soluttion Forum https://fr.audiofanzine.com/apprendre/mailing_forums/?idtopic=11137

Bargain good opportunity portable .. a good buy for the live .....
Did you find this review helpful?yesno
»
Read the 13 user reviews on the Evolution Uc-16 »

Evolution Uc-16 manuals and other files