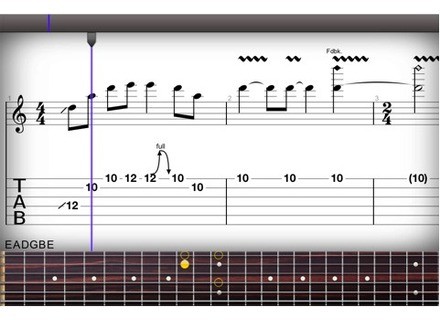 Arobas Music Guitar Pro App
Unlike the outrageously bad current version of Guitar Pro 6 for PC/OSX. Obviously it's down scaled version. Actually it started a tab player rather than an editor. If you needed to write tab on the iPad your option was Notion Music progression since that one was an editor and player. They changed it subsequently so it now is an editor as well.
Guitar Pro for IOS comes with midi sounds that suffice for the play along practice tool this aims to be.
You import your tab via iTunes or can write tab straight on the iPad. You get the option of tab and standard notation, standard notion or slash chord charts.

The input is limited to a rather basic set of symbols, no specific guitar things like whammy, way, markings etc. But to jot down lines its spot on. Your tools are note or rest duration from 32nd note to whole note plus dotted and triplets. No special brackets like 5;4 or 9;8 you will have to improvise with this with triplet settings. The limited set of performance symbols for the notes are harmonics, Bends, either bend or bend and release. In half steps from 1 half step to 3 whole steps. Vibrato, slides, hammer-on/pull-off, pal mute.
Plus insert note, insert bar, delete note, delete bar buttons. And of course bar line.

For the player you get loop mode, transposition, tempo. You can sort your files by last opened, artist, song, etc...
It works nicely as a notation/sheet music player for standard notation. And I actually prefer to use it that way instead as a guitar specific tool.

The score can be switched between small, medium and large display. And the metronome can be set for a count off as well as a count after the loop.

All in all I simply wish their actual 'real' software was working this well.
Did you find this review helpful?yesno
»

The Guitar Pro app is compatible with iOS 7

Published on 10/28/13
Arobas Music updated the Guitar Pro app in order to ensure compatibility with the latest iOS 7.