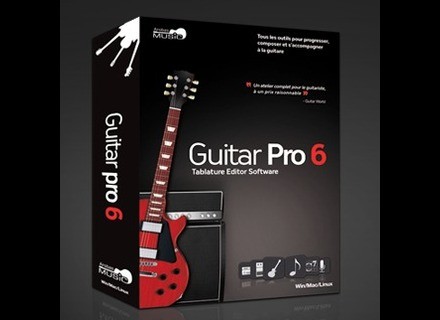 And the Tab Goes On… Guitar Pro started out as a small tab editor but, as time went by, it soon became an indispensable software for guitar and bass players alike. Now, with the sixth version out, Guitar Pro could actually create a new category of its own. Read more…

Arobas Music Guitar Pro 6
2
Writing for electric guitar presents a lot of difficulties when it comes to traditional scoring software, so since its first version Guitar Pro has been a must for every guitar player that wants to leave a detailed written version of their creations or transcriptions. For some, it has even become a part of the composition process in guitar-oriented tracks (a clear interface and a focus on speed writing are crucial tools).

That being said, I was sad to see I was having problems with Guitar Pro 6 from the moment I installed it. It took me a while until it recognized my EMU Tracker Pre or my M-Audio FastTrack. The interface is accessible enough but confusing to those who come from previous versions of Guitar Pro and wish to continue working in the same fashion(I'm not complaining about changes here, Sibelius 7 was a big step forward because it was actually easier to use once you got used to it).

As soon as a file is loaded the screen is filled with an invasive lateral toolbar that leaves no actual writing space. This, of course, slows down work either if you come from previous versions (because you will have to readjust to the new writing space) or if you just find it comfortable to have a nice perspective of everything you are writing or reading.

I've had quite a few random crashes (but then again, this has always been an issue with Guitar Pro). It also shows slowdowns even when the PC should fully support it. In my mind, those are huge setbacks: the main purpose of Guitar Pro is to provide a stable transcription tool. The other great problem is compatibility with sound interfaces: it took me some time to get the playback correctly working and not lagging after reproduction.

I have used Guitar Pro for as long as I can remember. Years before the idea of becoming a musician had crossed my mind I used to spend an awful lot of time writing 'songs' on Guitar Pro. I remember I used to complain about the unrealistic MIDI sound. Now that I work as a professional musician I wish Guitar Pro would go back to that. As the versions pass Arobas tries to cram into Guitar Pro more and more tools for 'realistic' sound (studio effects, amps, pedals, etc.), forgetting that this software was originally intended for transcription.

The result is a transcription software that has sacrificed stability and performance (and those definitely weren't issues they had already mastered!), as well as usability and efficiency, just to add a half-hearted attemp at modelation and emulation. It has passed from being a very useful and reliable tool to a mediocre program. I'd definitely reccomend to any user of older versions (specially 2, 3 and 4) to stick with that.

Arobas Music Guitar Pro 6
4
Guitar Pro 6 is the latest edition of the very successful guitar tabulature program. It's one of the few notation software made with the guitarist in mind. As a multi instrumentalist, I appreciate all of the classical elements of music notation available, and as a guitarist, I love all of the tab-based accents, such as slides, hammers, strums, chording, and even wah.

In the newest version, one of the biggest additions is the extensive selection of guitar amps, pedals, and other studio effects that can be used on the playback sound. Although very, very far from sounding real, and even far behind guitar amp emulation, it is a very useful tool, especially considering the guitar is totally synthesized. You may need some imagination to hear the heavier guitar tones, but a wonderful tool nonetheless. But with the wealth of classic amps, distortion pedals, compressions, and delays, Guitar Pro 6 brings something very new to the notation software table.

Guitar Pro has been a big of a resource hog in the past, on my older computers; I remember my old laptop struggling to play the guitar tones in real time without glitching and lagging. But I've had no problems with Guitar 6 on my current Windows 7 system. Playback timing is accurate, it doesn't glitch, and it is reasonably fast switching the playback on and off quickly.

Overall, this is a powerful tool that every guitarist and musician can use in some way. With flexibility to work with many instruments, including drums and piano, and with a staff and mixer interface that is relatively straightforward, it only takes a little musical knowledge to work your way though this program. And with Guitar Pro's smart guitar tabbing logic, it is always simple and easy to lay out guitar tabs.

I do wish there was a sustain function, for when I notate piano lines, and I do wish the guitar sounds were a little more realistic. But it has certainly never been easier to share tabs and guitar lines with all of my friends with this software.
Did you find this review helpful?yesno
»

Arobas Music Guitar Pro 6
2
Im a long time Guitar Pro user (since version 4) on Windows (XP, Vista 7) and OSX.
Before the change to OSX 10.7 it was running ok at best. After Lion it has become a nightmare of a software.
It will not recognize the sound card, regardless of it being the build-n card or any external interface, such as MOTU 896 MkIII, AVID Eleven Rack, and forget Axe-Fx 2 for this since the software only plays nice at 44.1 kHz sample rate.

The basic idea of it as a transcription app is sound. It worked great up to version 5. There are some weird short comings like midi export does not include pitch bends you draw into the tab, or print outs insist on having dynamics marks. But the ingest issue is that not only does the current version not want to run on Lion even though the developer claims its Lion compatible, even worse their support is beyond lame. Their standard question to the same recurring problem by numerous customers is have you switched your audio deice to 44.1 kHz.

If they get around to making it run stable again it will be ok. Not great! Before the issue with Lion it had a tendency to play back at the wrong pitch (sample rate issue). Therefore being completely unusable as a play along unless you changed the tuning of the program.

My suggestion for any one looking at transcription software would be to look into the programs notion music offers.
Also the display options and fonts are nothing you would expect from a transcription software. I've dabbled in Sibelius which looks amazing, and am used to do my wok in Finale which also looks great and the printed end results are not comparable.I just downloaded the den for Notion and that seems to do everything I need in the way I do, and look the way it should. Unlike this disappointment of a software.

zozoraff's review (This content has been automatically translated from French)" do not buy it!"

hello all,
I presents me I am a teacher of classical guitar and electric folk past ten year.
it is a disaster this new guitar pro 6!
I had 5 ro guitar before and I'm new guitar pro 6 were leaving but my kind out in two pages instead of one!
2 it normment demand for resources, it takes two take ages to turn ...
3 GTP are no longer read !! he read that GTP3 GTP 5 GTPX
4 I sent two email on the guitar pro support for their problems and explain the still no answers after a month!
Please do not make the mistake of buying it you'll regret it unless you have a very powerful PC or Mac with lots of RAM and again ...
it is for someone who wants to realize a piece of music but for the rest ...
a +
Did you find this review helpful?yesno
»
Read the 30 user reviews on the Arobas Music Guitar Pro 6 »

Published on 11/15/12
Arobas gives away 10 new RSE soundbanks to install for free with a software update.