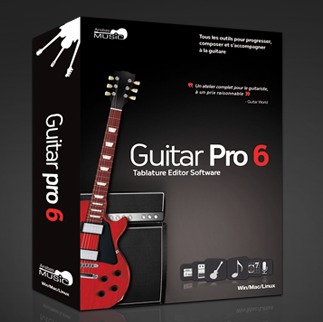 Guitar Pro started out as a small tab editor but, as time went by, it soon became an indispensable software for guitar and bass players alike. Now, with the sixth version out, Guitar Pro could actually create a new category of its own.

Installation on a Mac is a breeze: unpack the DMG, drag and drop the app into the Applications folder, authorize the software online, and while you're at it, get the latest update available, as well as the sound bank: 1,860 MB of sounds, including 791 electric guitars, 194 acoustic guitars and 119 bass guitars. You have enough time to drink a coffee... or read the very comprehensive documentation accessible via the Help menu. A few minutes later, with the guitar already on your lap and the mouse in your hand, you are ready to go: double-click!

Serious Facelift for a Serious Look

The first thing that catches your eye is the thorough revision of the GUI: instead of the basic Windows XP/Mac OS X look of the previous version, it features a much more classy user interface, combining black and anthracite with tiny blue spots for selected items. It looks beautiful and invites you to play, especially after listening to that nice acoustic guitar lick that plays as the program starts, sort of like Sibelius. It has undergone some major aesthetic changes, but even more important user interface and frontend design changes.

Although the software has the same overall structure as in the past, with the score taking up three quarters of the screen and the tracks grouped at the bottom. The overpacked tool bar of version 5 disappeared, and a new column on the left side allows you to switch between six panels called Universes: "Editing" manages notes/accidentals and score/tab editing tools, "Chords" provides all chord diagrams to be edited and added to the main window, "Lyrics" can be used to add lyrics to the music, "Instruments" for instrument selection, tuning and sound bank assignment, and finally "Effect" and "Master" that allow you to manage instrument and master effects. The tab system, which resembles Firefox strongly, allows you to open up to seven simultaneous scores.

Right under the score you'll find a very convenient navigation bar that allows you to move within the song, as well as manage pages and control zoom rate, tempo, playback speed, the metronome, etc. Now that we have a general overview, let's put the software to practice focusing on the score editing functions first.

You can start either with an empty file or use one of the numerous available templates that range from single guitar to jazz trio, string quartet and double bass; each template automatically loads the matching sounds. You can then fill in the score settings (title, author, copyright) and edit the style sheet that will define the score's overall layout.

From page format (margin, direction, etc.), header and footer to staff, fonts, and special notation (naming and display of right/left hand diagrams, etc.), nothing's missing. Layout freaks will surely enjoy the fact that they can save their style sheet and recall it any time later. The rest of us will use the convenient default settings to focus on more important things: keyboarding.

For this purpose, the "Editing" panel is much clearer and well thought-out than the former tool bar, which makes it a nice improvement. On top of everything, you'll find the key, key signature, time signature, and repetition settings. You also have notes, accidentals and dynamic markings, as well as guitar-specific notation marks: slides, arpeggios, pick direction, left/right fingering, tremolo bar, and even open/closed wah. In short, it is very comprehensive. There are two groups available: the first group serves to manage layout problems (stem direction and ligatures) and additional information inserted in the score (chord diagrams, beats, barre chords, etc.); the second group adds volume, tempo and pan automation data.

Each icon has a shortcut assigned to it so, once you learn them, you'll be able to work much faster. The result is a high-quality score that can easily compete on the same level as the big players in the market (Finale, Sibelius), as long as you stay within Guitar Pro's specific application field, i.e. medieval or contemporary music scores are not its main purpose – which certainly will not bother 99.99% of its users, anyway. Among its new functions, we really like the Design mode that allows you to change the bars on the fly, which is extremely convenient to make the score more easily readable. And if you add to it the unlimited undos/redos, you end up with a remarkable piece of software.

But that's not all. We haven't even mentioned Guitar Pro 6's most important improvement: the second version of its Realistic Sound Engine to manage score playback.

Guitar Pro is an excellent tab editor and most users use it only to display scores or to work out the guitar or bass part of a song at their own tempo or in a given key (to adapt it to the vocal range of a singer), using the playback engine. In this regard, playback quality in version 5 was only average – which was certainly enough to work on a song. But now, version 6 plays in a totally different category: with the 1.8 GB of sounds we already mentioned and the insert and master effect sections, playback quality is miles ahead of the previous version.

From the hundred or so sampled instruments that make up a sort of mini General MIDI kit, guitars take the lion's share with, for example, different mic combinations for Fender Strat, Gibson Les Paul, and ES; there are only two acoustic guitars (a Martin and a Spinosa) and no Telecaster. Even though it is more than enough, maybe Guitar Pro developers are already working on how to solve these deficiencies (we would also recommend including a Jazz Bass to the already available Precision and acoustic basses). To give you an idea of the sound bank's quality, you could say that it's on the same level as Native Instrument's BandStand – with a guitar section on steroids!

Combined with the FX section, the results can be surprising. While still far from EastWest or Spectrasonics it is quite a quantum leap compared to the previous Guitar Pro version. By the way, the effects section has five track inserts where you can chain, in any order, 11 guitar amps, 3 bass amps, 14 distortion pedals, 12 modulation effects, 2 compressors, 2 pitch shifters, 11 filters/EQs/wah, or 3 delay/reverb stomp boxes, all based on famous gear like Cry Baby, Tube Screamer, etc.

The master section features three inserts and a backline including two compressors, two graphic EQs, and five reverbs. The multiple effect combinations increase greatly the sound bank's possibilities: the Leslie and the lead guitar at the beginning of "Black Hole Sun" finally sound like they should, which was impossible in the past. Not to mention high gain guitars.

Just listen to some sound samples:

Amazing, considering it is a guitar tab software, isn't it? It certainly doesn't have the quality of the best ROM players when it comes to articulations, but it sounds really good on some songs considering its price. However, when it comes to clean sounds, the result is less stunning. It is specially striking in MIDI parts: if you were to strum a real guitar, the deepest note in the chord would be louder than the rest and an almost inaudible delay would separate the notes; Guitar Pro 6 cannot render such authenticity and plays all six strings with the same velocity level and exactly at the same time. Thus, the Beatles' "Here Comes the Sun" sounds very artificial and you will miss the original recording. Notwithstanding, the playback quality is more than enough to work on a song.

Moreover, even though the effects section provides more versatility and authenticity, playback is not always flawless: reverb effects are not among the best we've heard and EQ and compressor settings are often exaggerated (V-shape EQs, heavily pumping compression, etc.). So don't hesitate to mess around with the settings to avoid feeling like you're playing on a mainstream FM radio station...

You can export the audio as a WAV file and your score as a MIDI file or in PDF, ACSII, MusicXML, or PNG format.

Version 6 is definitely a major update for Guitar Pro. What used to be a small software tool has become the ultimate reference in its category thanks to its intuitive user interface, well thought-out features and an absurdly low price. Should you upgrade your previous Guitar Pro version for $29.95? Yes, a thousand times yes! You'll benefit from a better design and a much better sounding and efficient audio engine than in previous versions. Should I buy the full version for $59.95 if I don't own a guitar tab editor? Yes, a thousand times yes! If you are a guitar player and want to practice your instrument while having access to one of the largest score banks on the web. This is where Guitar Pro really kicks its competitors' butts: you have tens of thousands of songs at your disposal on the web, either for free or on commercial websites...

To wrap it up, Guitar Pro is certainly not perfect and there is plenty of room for development (apart from MIDI playback improvement, we would love new features like an audio track that would allow you to record and make transcription easier). But the price is still pretty low (considering the improvements included in version 6, I expected a hefty price increase) and the software is very useful, so I don't see any reason not to recommend it very strongly... 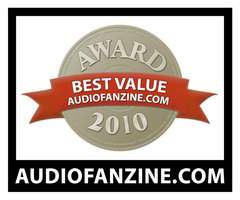