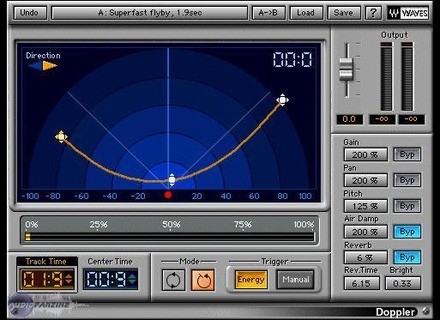 View all offers for Waves Doppler »

Waves Doppler
4
Ever want to create those whooshing sounds that you hear from flangers and whatnot but in a more easy to see manner? If so, Waves has the plugin for you. With this program, you have adjustments for the frequency change, the speed, distance and a few other things. To use this, you simply enable it on a buss and start adjusting. I didn't experience any compatibility issues, so I can't comment on that. I never read the manual, but I don't think it's really necessary for these plugins. This plugin can be a bit more daunting for the first timer, so I recommend messing with the built-in presets and seeing how they're all set up. That should give you a good idea as to how everything works.

I don't have as much use for this as I do their other plugins. It's a solid plugin, and you can create some cool flanging/speed movement sounds, but aside from that, its usage is limited. I would assume a lot of electronica guys would love this as I hear this kind of effect in almost every trance song out there. If that's the case, you'll probably love this plugin.
Did you find this review helpful?yesno
»

Waves Doppler
5
The Waves Ltd. Doppler is the only plug-in that I know of that actually simulates the Doppler effect! If you don't know what the Doppler effect is, it's the reason that a siren changes pitch as it passes you by. With this plug-in you can simulate this effect using two different modes - either a manual or auto mode. Installing the plug-in for me was easy as I did so along with the rest of the Waves Complete bundle which this is of course a part of. It's available in almost all of the Waves plug-in bundles, although I don't know if you can get it as an individual plug-in. The interface of Doppler gives you absolute control over every aspect of this effect, including gain, panning, pitch, reverb, and more. As I stated earlier, it's got an auto detection mode as well as a manual one. It's also got a helpful graph to show you the effect on screen. I'd have the manual handy if you think you might get lost with this one, but I found it pretty easy to figure out how to use without one.

The system that I'm running the Waves Ltd. Doppler plug-in on is Pro Tools LE 8 based. I run Pro Tools LE with a Digi 002R audio interface, and monitor with a set of Adam A7's. The computer that I'm running everything on is a Mac Book Pro lap top, consisting of a 2.2 Ghz Intel Core 2 Duo processor and 4 GB of RAM. I've never had a need to run more than one of these at a time, so in turn I've never had any performance issues with it within this system.

If you are looking to simulate the Doppler effect, look no further than Waves' Doppler plug-in. This can be useful both in music for an effect, as well as for post production and other applications involving audio. The plug-in can achieve the effect in a variety of different ways, as it's possible to get all different types of sounds using this effect. I don't know how piratical the plug-in is for me in terms of daily use, but every once and a while I can see it coming in handy. Unless you're using this all the time, it's probably not worth spending money on outside of a bundle you're already getting, but it's definitely a nice one to have if you are getting a bundle with it in it anyway...

Waves Doppler
5
Doppler installed without any problems. You just have to register it with waves, follow the simple installation which is very fast, and make sure that your host software adds this into its VST registry. Then you should be all set to start using it. The configuration is very simple and the controls are intuitive. The manual does a great job explaining the functions and the theory behind how this nice plug-in works.

I am running a Dell desktop computer that has Windows XP on it. It has a dual core processor and 4GB of ram. My host software is Nuendo. I have no problems running Doppler in VST format with my Nuendo system, it has always worked perfectly. This plug-in uses very little CPU resources, probably less than 1%. I worked on a project with lots of motion and things whirring around in it, and I used probably about 15 instances of Doppler. All of them combined used only about 5% of my CPU overhead, so this is a very efficient software. It is very stable, it has not crashed.

I've been using this software for over 3 years. I mostly end up using it for soundtracks to video, but I have used it successfully in music many times as well for special effects that can sound really neat. Obviously the best thing about Doppler is the degree of control you get. You can get very specific about the degree to which you can hear the doppler effect, such as different speeds from coming and going, different pan positions, and distance positions. And above all, it sounds very realistic! I haven't tried doppler plug-ins by other manufacturers, but I haven't needed to because I have been very satisfied with this one. Great value! I would get it again.
Did you find this review helpful?yesno
»

Published on 04/26/11
For a limited time, you can pick up Waves Doppler plugin at a reduced price.