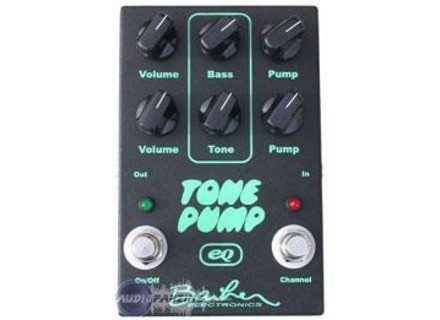 Barber Tone Pump
5
The Barber Tone Pump pedal is a guitar boosting and EQ pedal. This is a newer version of the Tone Pump, the original of which I've not used nor am I really aware of the differences between the pedals. This one is an analog pedal that has a standard configuration consisting of 1/4" connections for out and input and a 9 volt battery clip as well. It's not rackable as it's a stomp box to be engaged by your foot while playing guitar.

The configuration of the Barber Tone Pump in terms of controls is fairly simple to follow and understand. It's got two seperate channels that you can switch back and forth between. Included for controlling your sound here are knobs for volume, bass, and pump for the first channel, and volume, tone, and pump for the second. It doesn't kill any of your tone at all when it's not engaged and is perfect for giving your tone that extra get up and go for lead tones or otherwise when needed. Definitely a huge plus that you get two separate channels here as it really adds to the possibilities.

The Barber Tone Pump pedal is one that any guitarist would enjoy having. It's great for getting traditional overdrive and distortion sounds but also excels for giving your tone a little bit of boosting here and there. Between the two channels it's possible to have two great sounds locked and loaded and ready to go at your disposal. I love it's versatility as you're getting an overdrive and booster in one here.

I didn't know much about Barber Electronics or the Tone Pump pedal until I recently had the pleasure of using it. It's one of the best overall tone booster/EQ pedals I've used in recent memory as it really brings a lot to the table. It's very well made and has true bypass as well, but because of this great craftsmanship, it's going to cost more than your average booster/overdrive will. Having said this, I think it's better to save up a little more and get something of great quality like this as it's a pedal that should give you great tone for a long time to come...
Did you find this review helpful?yesno
»