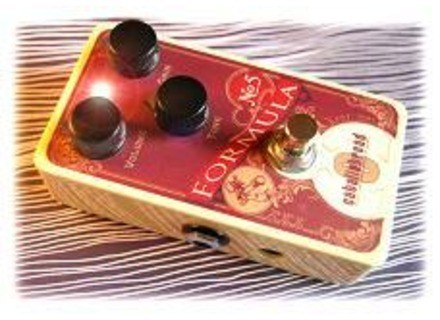 Formula No. 5, Overdrive pedal from Catalinbread.

Huge. As the previous reviewer said, it's thick and creamy, but without drooling, with a beautiful grain. I play with a Vigier Excalibur HSH DiMarzio and telecaster. it sounds extra everywhere. emulation of the Fender tweed is convincing.

qq days use and I know she will never leave my pedal board. She finally dethroned the TS9. It gives me the ultimate overdrive. I particularly appreciate the sensitivity of the circuit to the attack. Gently cleans you stay in, once you attack a little harder, it crunche nicely to then go to sth more hot and distortion if you scratch like an ox. But it's still fantastically vintage, ideal for blues rock to Keith Richards, or more like acdc hard.

Catalinbread Formula No. 5
5
Formula 5 manufactured by Catalinbread (traditional way), is a pedal-type JFET emulation tweed Fender amp.
In my opinion, no pedals, whatever the technology, can not "emulate" the sound of a tube amp ...
However, we can say without hesitation that the products Catalinbread go a little further than the classic overdrive TS (op amp)
The case is really very cool, great look, nice finish.
When you open the box, electronics seems fragile, it's not worth the circuits Fulltone, master strength.
For audio, see below.

The purpose of this pedal is to have sound without acute aggressive and sharp, a fat and slightly fuzzy (it's lightweight), with a thickness and a grain exceptional.
Like the BJF Baby Blue, she has a "sweet spot" which is enlightening, a pure delight!
You can vary the settings, but it always comes back to sweet spot, because that is where the magic happens.
The sound is both solar and thick, it sewn treble frequencies and can play the micro bridge with the open tone without the ear bleeding.
In boost, actually (you re right dear Phane), it really is not terrible (flight background has zero gain)
I have the same problems with my Baby Blue, we must be content with the sweet spot.
Sound on the other hand (compared to other overdrive pedals) seems very "light" and is in the spirit of the old fender.
Anyway, it's really fun to play for one who liked her thick, soft texture and smoothness with a hint of fuzz (in the spirit Eric Johnson)
It responds well to my expectations and the evolution of my ear "overdrivée"

Level emulation, DLS really impressed me!
The surprise effect is smaller because it is expected to better with Catalinbread.
This pedal is very "typed" is clear, he must love this kind of sound (which is my case).
It is not very versatile, it does not boost, but it has a remarkable grain, which is quite addictive.
It is to say, I prefer even to DLS I find a bit bright for my tired old ears (rocked too close to the Marshall cabinet)
Try before you buy it anyway.
The samples on the site are tempting, but it means what happens on your gear, there may be surprises.
Great product overall, sorry!

The value for money (by ordering on the site), is remarkable.
It is typed as OCD V4, she did not have the same flexibility, but it need not blush before.
The grain is very subtle for a pedal, and it's really fun to play with.
Do not plan to leave it connected all the time (what I do with DLS), but for fine theatrics, this is the pedal you need.
It is in my top 5.

Phane's review (This content has been automatically translated from French)" "

Catalinbread Formula No. 5
4
This is an analog pedal based JFETs. It is supposed to emulate the sound of the saturation of a vintage Fender amp with a very accurate model (see on the site Catalinbread for more information about it). Be powered from 9 to 18VDC with a battery or an external connector to the standard Boss, true bypass switch, Input, Output, well, you do not need a drawing? ...

Config standard three knobs: - Volume: rather as explicit identification, is not it? - Gain: do not rise very high, but enough to get a good old-saturation. The gain at least offer a small saturation already, no way to play it in pure clean. - Tone: usable over the entire range of adjustment allows for different voicings all usable. There is great interaction between the three knobs (notably Gain and Tone), which complies with the general operation of a tube amp. But it takes a little more time adjusting since it does not hesitate to pass from one to the other three knobs. The advantage of presenting several sweet spots interressants.

The particularity of this pedal is to react as an amplifier, while maintaining the sound of the guitar. Well, everyone knows that the saturation of a Fender is not very precise, well here it is served, it throws up (in a good sense), it dribbles into the bass, it just eats the attack in short, a very natural sound, but very typical. So, I prefer single coils with (who said Fender?). The pedal is very dynamic, it responds well to the attack and volume of the guitar. Supplied with 18V, the sound is less compressed and lose sustain. Then it sounds more natural, but to my ears, it loses some of its originality. There's maybe a compromise to be found in 15 or 12 ... It can be a boost overdrive or clean boost, I recommend this case to adjust the gain of the rather low if it fuzz and compresses it in a way not very pleasant. I do not find it very effective boost. It works, but there are much better pedal for that.

Pedal rather typed, which provides a grain of saturation not common. Finally I say this because I see around me that we are very likely to favor a Marshall sound when it comes to saturation. I recommend it to anyone looking for vintage sounds instead. Lovers of all kinds of overdrive, try this, it is part of the pedals that are worth listening to. I recommend to fans of modern sound and accurate (I do not even talk about Metal ...). Yo!

Published on 04/12/10
The Catalinbread Formula No. 5 is described as having a "clear buttery top end, stringy but slightly spongy and growly bottom, and greasy sizzling midrange."

See all 51 photos of Catalinbread Formula No. 5 »

View all 5 videos of Catalinbread Formula No. 5 »